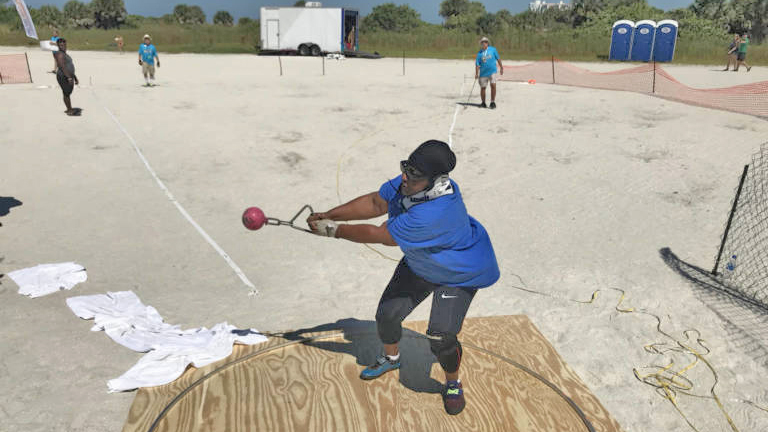 Wearing a neck brace after her most recent accident, Neni Lewis throws the weight at Sunshine State Games.

I once called Masters Hall of Famer Neni Lewis “easily the greatest age-group thrower in history.” She also deserves her own Hall of Fame wing for injury comebacks. I told her story several times. In 2008, I wrote: “Lewis qualified for the Olympic Trials in 1980, 1984 and 1988 in the shot put. Her best chance to make the team was in 1988, when she was throwing close to 60 feet leading up to the trials. But her bid was cut short when a car accident injured her hip and back.”

After one episode in 2012, she said: “I am out for the year and hopefully not out for good.” Of course, she kept on trucking, and over the weekend added to her legend. Neni has been a masters champion for decades.

Now she’s been informed that her late September score of 5988 points in the ultraweight pentathlon is a W55 American record (there is no world record), having upped her own W55 best of 5713 points. More amazing: She’s only nine months away from turning 60.

“On Sept. 28 at the Sunshine State Games in Clearwater, Florida, James Griffin hosted a wonderful Super Weight throw for the youngsters and the Ultra Weight Pentathlon for the masters on the beach,” she wrote.

“The meet was athlete friendly, the people were friendly and everyone had a good time. (See results here.) Despite the 90 degree weather, it did not feel so bad with a mild breeze coming from the ocean and a big tent for shade.”

She shared the point total and added: “Had I not walked out the front of the circle on the first and best weight throw (16 lb.), the score would have been over 6,000 points. By next June, I move up to the 60-64 age group and I look forward to throwing lighter weights.”

“In September, 2018, I was rear-ended and sustained a mild concussion. Two screws loosened up in the hardware in my neck,” she said. “By the time I was almost recovered, I was T-boned by a driver who went through a red light. Another concussion and hip and back problems. Driving in NY can be rough.”

But despite the December accident and suffering from extreme fatigue (thyroid problem) and disability (neck & range of motion), she says she finally got some of her rhythm back and hope to continue into 2020.

One of the more impressive performance came from Oneithea Lewis, an Ultra Weight Pentathlon athlete, from Oakland Gardens, NY, who set a USATF National Record in the 50-59 age group with a combined score from all five throws of 5988. Lewis threw five different weights, ranging from 20 to 98 pounds.

She did it all while wearing a neck brace. In 2012, Lewis fell from a ladder while retrieving her throwing equipment from the attic. She suffered multiple neck and back injuries and now has 19 pins and screws in her neck.

She only wears the brace during competition and will require back and hip surgery in the near future.

“After that, I won’t be able to compete any longer,” she said. “I’m trying to do all I can while I still can.”