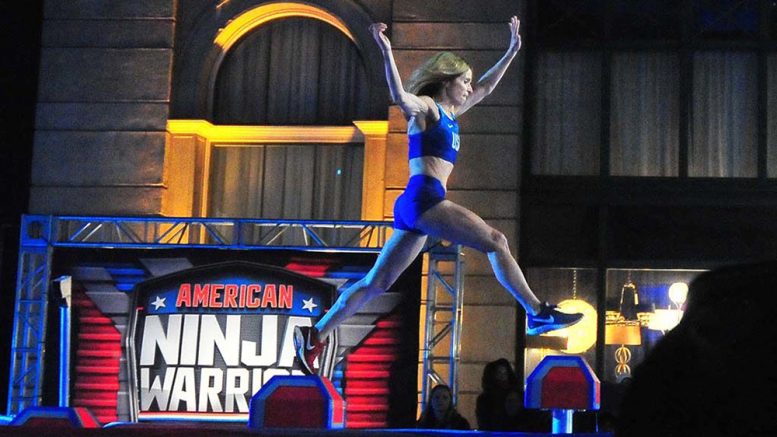 Colleen Barney didn't make it past first obstacle, but she gave me a first-rate story on a reality TV show.

I tied my PR on Tuesday night. Not for the 100 or high jump, but for awards at the San Diego Press Club journalism contest. First in 2017 and again this year, I picked up 14 awards for a variety of posts on Times of San Diego, including a photo of indicted Rep. Duncan D. Hunter and a video of a crazy anti-LGBT trio from Westboro Baptist Church in Topeka.

As usual, some of my ribbons were for stories on masters athletes. I won second-place awards for my report on sprint great Colleen Barney competing on “American Ninja Warrior” and Carmen Jackinsky, the race walk shoe designer/seller who entered the 50K national race walk at age 55. (She dropped out due to heat.) My wife, Chris, won nine awards, mainly for photography. She also shared a first-place plaque with me and with Times of San Diego staff for being chosen the top news site in San Diego County. (The San Diego Union-Tribune didn’t enter. So we’ll take it.)

Speaking of records, Jeff Brower has created a new website to help folks look up American masters age-group records. Our USATF masters records czar registered the domain masterstrackandfield.org in July and in mid-October sought opinions from some friends on the new tool (accessible from the official usatfmasters.org site).

I’m not sure why the record lookup is necessary, but Jeff says he grew tired of the various problems with usatf.org — “limited searching features, slow website response, broken update process, etc.” He also posted hurdle heights and spacings, and implement specs for all throws.

Jeff did the coding, he says. And as of two weeks ago, he hadn’t submitted a request for money from USATF masters.

Not sure whether Jeff has USATF permission to use its logo on his own site, but here’s where to generate records.