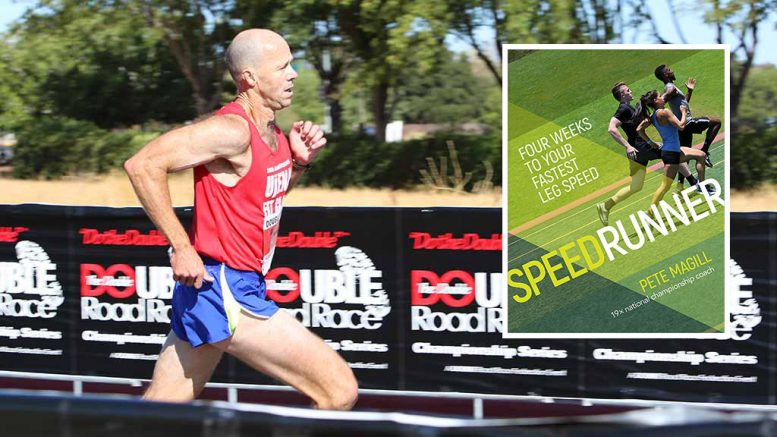 Pete Magill says he's run distances 400 and up. I challenge him to a 100-meter sprint on my favorite downhill track.

Pete Magill is such a buzz-kill. Our 5K Legend friend’s latest book, “SpeedRunner: 4 Weeks to Your Fastest Leg Speed in Any Sport,” warns against alcohol (it “damages the cells that produce testosterone and inhibits recovery and muscle adaptations”). He notes studies saying Kinesio Tape “was no better than sham taping/placebo.” He says ice baths after workouts reduce long-term gains in muscle and strength.

(And don’t get him started on chiropractors. He quotes one critic as saying: “If [spinal manipulative therapy] works, it shouldn’t be taking over a century to prove it.”) “SpeedRunner” includes a back-cover blurb from Steve Scott: “He consistently outruns half my team! He must know something the rest of us don’t.”

So what if I don’t drink, can’t afford KT tape or chiros and shiver at the thought of ice baths? I’m good to go, right?

Not so fast. Pete’s masterly digest of speed-training wisdom says I have to maximize my three types of energy systems — Phosphagen, fast glycolysis and the aerobic system — to produce ATP. (I wish the acronym were STP. Makes for better headlines.)

In this 281-page marvel of scholarship, I got the distinct impression that you have to train specifically and smart to improve speed. More buzz-kill. I count on natural ability and good looks.

That’s not news, of course. When I trained with the sprinters and hurdlers at Kansas in the mid-1970s, I saw distance runners do trackside reps with homemade barbells (coffee cans filled with concrete connected by steel bars) under the Bob Timmons regime.

So what’s the advantage of studying Pete’s third book? You finally understand the keys to the speed kingdom. The photo-illustrated pages (again by Pete’s friend Diana Hernandez) show how to unlock fastness. He also offers workouts geared for folks who have access to special equipment and those who don’t.

In fact, if you trust Pete, simply skip the first 118 pages and go straight to the drills. (Some are featured on his YouTube channel, too.)

Many are familiar: bounding, skipping, one-legged hops, walking lunges, quick feet. Others are a bit esoteric: “weighted ankle poppers,” Nordic curls, plank rotations. But I appreciate that every one is justified as a means of gaining certain strength, agility, balance, etc. A nice feature is a “Coach’s 2 Cents” box on many pages, reminding you about technique or attitude.

“It’s easy to let your mind wander, your back sway, and your butt sag during planks,” he writes in one. “Don’t.”

The best part of writing a new book … Learning SO much new info while doing the research! Never stop learning! #running pic.twitter.com/Kr0YILvAuS

That’s also how Pete writes — with humor and concrete imagery. It’s needed to slog through an eight-page section devoted to the “gait cycle.” (But even here he’s fun to read — “Your leg works like a pogo stick.” Or the running movement is a “human slingshot.” He sounds like a “Batman” screenwriter from the Adam West days — Whap! Whoosh! Zing!)

“Sometimes, this much data can be overwhelming,” he says. “But the main takeaway is pretty simple: Train to push harder, more effectively and more efficiently. That’s it.”

Talk about imagery: He quotes an expert who compares initial speed training to having a full tube of toothpaste. It’s easy to squeeze out improvement at first. But as the tube empties, you have to “press the tube with very specific and well-designed” actions.

“But that’s a wonderful problem to have,” Pete writes. “Imagine being so fast and powerful during acceleration that you’ll need an Olympic-level coach to eke out a bit more.”

Pete goes out of his way to appeal to football players. He recalls an offensive lineman who benched 500 pounds and sought Pete’s help to “drop three-tenths off my 40.” (Pete’s workouts apparently did the trick.) He also mentions baseball, basketball, tennis and soccer — to woo those demographics. But no triathlon citations, which should irk podcaster Chris Gerard, who interviewed Pete in May. (Listen for other training and injury prevention wisdom.)

Masters track is barely mentioned — although he quotes masters sprinter Jimson Lee of speedendurance.com fame. Geezers can certainly benefit, however. Most of the drills can be executed by age-groupers. (My only hesitance: Those knee-stressing side-to-side exercises could lead to injury.)

One of my favorite pages is 107 — with a “Recovery Strategies” chart that rates 28 common ways to rehab — from “Active recovery days” to “whole-body strengthening (rated “highly effective”) and including pre-workout static stretching (two skull-and-crossbones harmful) and “compression gear” (rated “ineffective.”). My top strategy? Sleep (rated “highly effective”) Thanks, Pete!

I also like that Pete shows his work. Specifically, he lists about 100 sources of technical scholarship that helped him prepare the book. (He notes it’s a partial list of resources, “but a collection of many I find useful for curious readers.”)

The book may be too late for Malaga-goers. But for those looking to an upcoming Senior Olympics or even Toronto 2020, “SpeedRunner” offers hope and change. Also check out the Amazon page.

Now excuse me while I do a crab walk followed by some windshield wipers.

1 Comment on "Book review: Pete Magill’s ‘SpeedRunner: 4 Weeks to Your Fastest Leg Speed in Any Sport’"