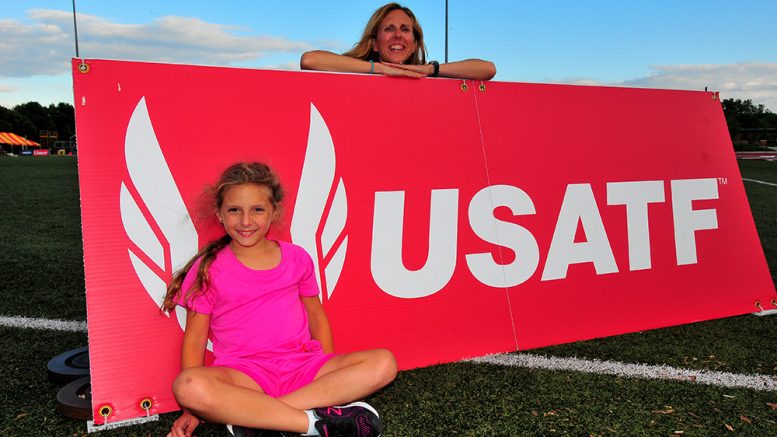 I arrived in Ames on Wednesday afternoon after a flight from Las Vegas (my layover from San Diego) to Des Moines. On that leg, fellow passengers included athlete royalty Kathy and Bert Bergen, famed massage therapist Bill Theriault and some USATF officials.

Once settled in my Bed & Breakfast just outside Iowa State University (a former Delta Chi frat house that’s on the National Register of Historic Places), I drove to the track and found a gate unlocked. Athletes are greeted at track complex — next to ample parking, thank goodness.

I met a 5K and 10K contender named Mindy Zottola, apparently a newbie to masters track nationals, and her husband, Art. I took some pictures of Mom and daughter Kayleigh (given wings by the USATF logo — an angel with or without). And Mom’s a warrior, according to this story from her hometown paper.

It recounts a 2008 episode where she felt a stabbing pain in her back during a training run.

She fell to the ground, gasping for air, and thought, “Did somebody shoot me?”

She soon started breathing again and didn’t feel any blood. So perhaps because she had recently completed a 3:35:02 marathon, or maybe because she was just being stupid, she got up and ran another four miles before calling her doctor. He immediately sent her to the ER.

The diagnosis wasn’t good. She had multiple blood clots on both of her lungs. One had broken off and wedged into an artery in her left lung, causing a pulmonary embolism. She lost 30 percent of its function.

As she recovered in a hospital bed over the next week, doctors delivered more bad news: She’d never again run competitively. Her world, she says, came to a halt.

She didn’t know how to go forward. But she couldn’t allow herself to lie around, either.

With effort, she walked, each day a little farther. After six weeks, she felt strong enough to ignore her doctors’ orders and secretly ran on a treadmill at the YMCA. She could do only 10 minutes to start, but with time she got better.

And now she’s in Ames, ready for Thursday morning’s 5000.

As I tell anyone who’ll listen: EVERYONE who runs in nationals has issues, overcoming the odds to compete here. (In my case, it’s the shame of having trouble going sub-16 in the 100 at age 64. Hoping my luck changes now that I’m newly 65.)

Here’s the press release on the meet (and the USATF website version).

Also from Pittsburgh is Charlie Allie, who needs no introduction. But just in time for Ames comes this wonderful profile in The New York Times.

See y’all at the track!