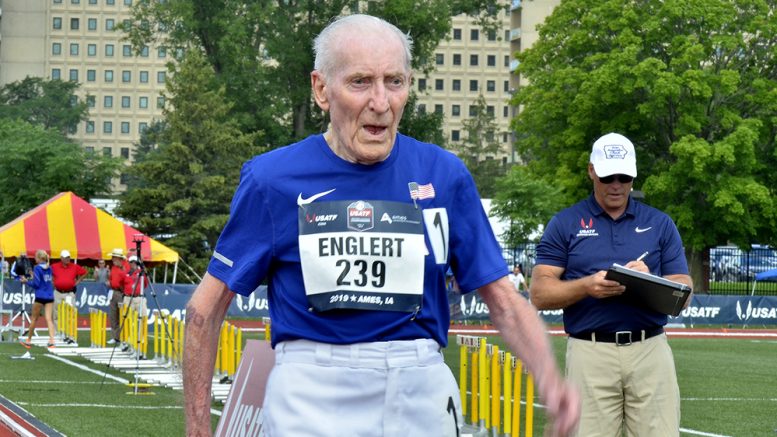 I was at 2009 Oshkosh nationals when Frank Levine set his M95 world record at 5000 meters. That weekend, the Norristown, Pennsylvania, gent also ran the 400, 800 and 1500. He and fellow 95-year-old Max Springer sparred at the shorter races, with Max winning both. But Frank had his age group 15 and 5K all to himself. And his 5K set the standard for 10 years. Roy Englert approaches the cameras for start of his 5000 WR coverage.

Now we’re having another moment. At Thursday’s Day 1 of USATF masters nationals in Ames, Iowa, Roy Englert of northern Virginia ran/walked the 5000 in a sensational 42:30.23. He was interviewed on local TV and his mark went national via a Sports Illustrated tweet. (See results here.)

I got some nice shots, and was preparing to trumpet the WR (and several others at Ames). But I went down a rabbit hole when I discovered that on May 4 or 5 (sources differ), M95 Antonio Nacca of Italy ran 5000 meters in 39:42.52.

I found the Nacca mark on the unofficial Wikipedia masters records page, and confirmed it with an Italian media outlet.

Dutifully, I reported the discrepancy to USATF officials. Then I got this note in reply:

“Good” news. At [USATF masters executive committee meeting] tonight Rex [Harvey, nationals masters chairman] reported that Sandy [Pashkin, WMA records czar] indicated … they have no birth certificate or other doc from the Italy guy proving DOB so there is no record for him — hence Roy’s IS the best pending WR and what we and the release said is true.

Oy vey! That opens another can of worms. If WMA has no record of Antonio’s date of birth, why does World Masters Athletics credit him with five indoor WRs (including M95 800, 1500 and 3000? How did this fraudster sneak through the system? Italy’s athletics federation lists him as record holder, too, BTW.

Well, for the accuracy of the results, here you can find the official results

According to the Italian Federation, he is born in 16 December 1923: you can find it in this Italian master record sheet in which you can find also the M95 record over 5000.

So the Italian federation has well accepted the mark.

About Antonio I’ve found that he has beginning athletics at 56. He is a retired police marshal, and he was a big smoker in his past.

I don’t know if the Italian Federation will submit his mark… I’ll have a phone call with the master chief in order to know this.

In the meantime, enjoy my brief chat with Roy:

I took lots of pictures at Iowa State, and will post when time avails, including shots of Neringa Jakstiene in the pentathlon 80-meter hurdles — contested a second time because the first time lacked a wind gauge. Thanks to the redo, she set a W55 world record in the pent. (Also got tons of shots of Mindy Sawtelle-Zottola, who graciously won the W45 5000 in her first masters track nationals after I wrote about her Wednesday.)

Ames, IA — Masters athletes set three age-group world records and one American record during the first day of competition at the USATF Masters Outdoor Championships on the campus of Iowa State University. The world’s best athletes ranging from 30 to 96 years of age are among the more than 900 athletes competing at ISU’s Cyclone Sports Complex this week.

The 2018 USATF Masters outdoor champion in the 65-69 discus, hammer throw and weight throw, Mary Hartzler (Unattached) set a new American record hammer throw in the women’s 70-74 with a throw of 32.35m/106-1, more than 15 meters ahead of the second place finisher. Hartzler threw over 30m on five of her six attempts with winning heave on her fourth toss.

Be the first to comment on "USATF defends Roy Englert’s M95 world record 5000 at Ames, labels Italian an age fraud"