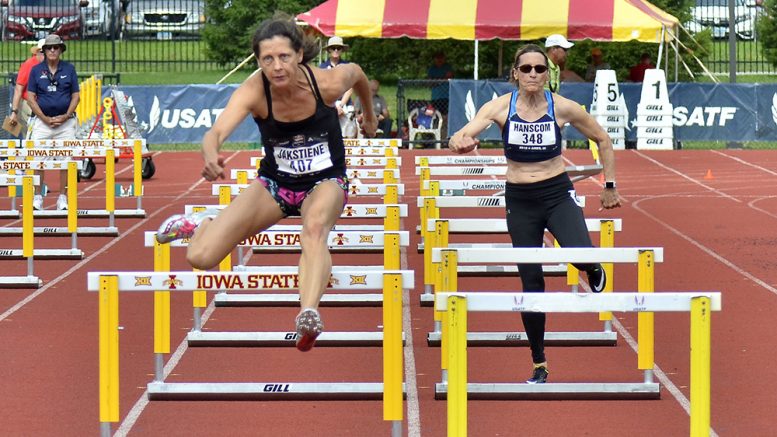 Despite a recent illness (with a high temp of 102), W55 Neringa Jakstiene of Memphis sizzled at Ames nationals, smashing yet another Phil Raschker world record. This time, it was the outdoor pentathlon with a score of 4594 points. Phil set the listed WR at 2002 Orono nationals with 4511. (This brings her recent WR total to 10.) A key to Neringa’s latest record was her 12.86 in the 80-meter hurdles, which would have been an American record but for a 2.2 mps aiding wind. (2.0 is the maximum for a single-event record but not for a combined-events record.)

But she might have done even better. Her pentathlon hurdles was a re-run. The first 80H was contested without a wind gauge, so at the next event — the high jump — USATF Masters Combined Events chair Bill Murray confessed that officials had screwed up. He gave pentathletes with record hopes the option of running the hurdles again. Four took him up on the offer. (I’d love to know Neringa’s first time.)

(That made M55 Tony Echeandia’s 400-meter hurdles world record Sunday of 57.73 that more remarkable. He crushed the legendary listed WR of 58.92 by Germany’s Guido Müeller at 1995 Buffalo worlds.)

After Saturday night’s athletes banquet at the fancy Iowa State University Alumni Center (which impressed masters national chair Rex Harvey, an Iowa State engineering grad), I spoke with Neringa about her track career and Lithuanian background. Turns out she’s been set for months to be sworn in as a U.S. citizen — but track meet dates have always conflicted. Now she’s set to become a full-fledged American — able to compete at worlds as a Team USA member — on August 8, 2019.

Her story was summarized by the Memphis Commercial Appeal in May. But my chat with her Saturday adds flesh to the bones.

I took thousands of pictures at Ames (when not pushing Damien Leake in the M65 100 or holding up the high jump). I’ll share action shots later.

But before my MacBook Air ran out of memory for photo downloads, I created an online gallery of the shuttle hurdles relay, where a first American record was set in the M75 age group. (Michael Burns, David Marovich, Howard Booth and Thomas Gomillion ran 1:18.76 in the 4x80s.)

My gallery from Saturday night’s awards banquet is here. As always, you can fetch any of these high-resolution images for free. But I do accept love offerings via my Donate button.

At Friday afternoon’s Athletes Meeting (attended by about 40 under the Declarations Tent), Rex repeated his admonition that Americans going to the Toronto WMA regional meet avoid hot-dogging and doing flag-draped victory laps. “Leaving the meet with people’s respect is a lot better than just beating them,” he said.

Robert Thomas Jr. of Indiana said three cities may bid for 2022 indoor nationals and two for 2022 outdoor nationals. The potential indoor bidders are Virginia Beach, Spokane and Houston (University of Houston). Outdoor seekers are expected to be Lexington, Kentucky, and Provo, Utah (home of BYU with a spectacular mountain backdrop. I spectated at the 1975 NCAA meet there.)

Rex also announced that the 2018 Malaga worlds financial aid program won’t be repeated for 2020 Toronto worlds unless a sponsor comes to the rescue. But he hopes to revive the grant program for 2022 outdoor worlds in Gothenburg, Sweden. (Indoor worlds in 2021 are in Edmonton, Alberta.)