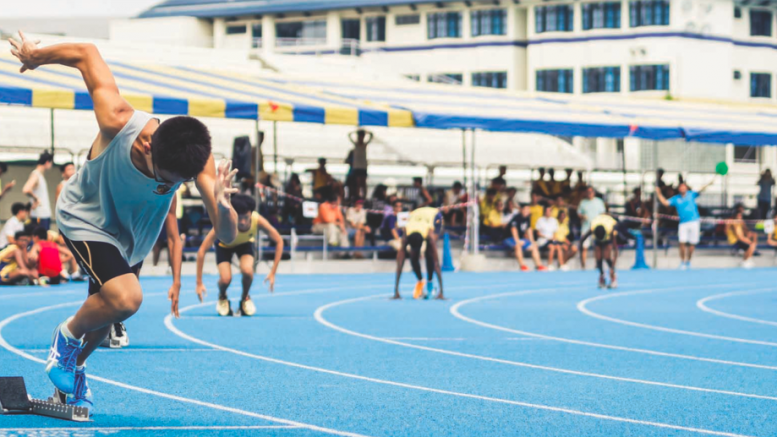 The "About Us" page of Singapore Masters Athletics features this photo of youngsters. Maybe grandkids of members?

Monday update: WMA President Margit Jugmann wrote me this morning: “The AMA Secretary and member of WMA Council Sivapragasam Sivisambo informed me today that AMA council has already taken care of the issue. It seems that there were some misunderstandings. SMA confirmed that a qualifying standard was set to select athletes for SMA to give subsidy for them. SMA is giving subsidy for the selected athletes. It is confirmed that those who don’t qualify or those who do not want to follow this procedure are NOT stopped from participating — they can all participate and pay on their own, which means all master athletes from Singapore are encouraged to participate as in the WMA & AMA Constitution. The above means that SMA is following the WMA Constitution and promoting Masters athletics in Singapore. WMA is looking forward to see a big contingent from Singapore in Kuching and even in Toronto.”

Well, isn’t that nice! But many questions remain, including: Why didn’t SMA make this clear from the outset? Why doesn’t it use its website to lay out the standards for subsidy (as USATF did for Torun worlds)? Does SMA still encourage member athletes to leave spouses at home?

A few days ago, Roald Bradstock poked a hornet’s nest by asking his Facebook followers whether masters track is a “sport” or “activity.” He wrote: “If there are NO ENTRY standards to competing in the USA, European or World Masters Championships then isn’t Masters Athletics just an activity like a 5k fun run?”

Roald, of course, has a great grip on the javelin, setting records every few years. But he didn’t realize that the recurring issue of qualifying standards has a less-amusing side. Just ask the nearly 1,300 Singaporeans who signed a petition to protest its NGB saying it won’t send athletes to December’s Asian Masters Athletics championships if they don’t meet certain standards.

Of course, this violates a bedrock principle of masters track (and current WMA rules: “Entries shall not be subject to prior achievement of qualifying standards.”).

From the dawn of our sport, it’s been clear that in WAVA or WMA meets the only requirements for entry are proof of age and paying your fees. (Sanctioned athletes or affiliates are the rare exception — dopers and Russians, for example.)

As first reported by master-athlete.com, we learn of a petition by John Chua that begins: “It is with great alarm and regret that in the past year, the latest management committee of the [Singapore Masters Athletics] has instituted ‘rules’ for participation in Masters’ events where no such rules have existed for the past 40 years, actually creating obstacles against participation. Despite many appeals, SMA is intent on enforcing these ‘rules’ with the rationale that since they are the sole representative body to WMA, they have the power and authority to determine who can participate in any WMA-sanctioned event, without interference from WMA and Asian Masters Athletics (AMA), while bringing up various questionable rationales to justify their decisions.”

SMA is requiring members to fly together with the team and undertake “compulsory” training with SMA-designated coaches and training locations to be allowed to take part in the AMA meet, even though athletes had already qualified.

But wait! There’s more! SMA is “discouraging spouses from accompanying athletes” to the AMA meet in Malaysia and “discouraging exploration and enjoyment in the host cities.”

Of course, WMA can shut this down in a millisecond with a well-worded letter. I wrote to WMA Prez Margit Jungmann in Germany, and she replied Saturday that she’s “short [of] information as the case is still going on” and “AMA council is aware of the problem and in charge to take care of the problem for the moment.”

She added: “Members of WMA have to follow WMA constitution and must comply to by-laws and rules of competitions. That means: All Masters Athletes registered with a member shall be eligible to compete in Regional championships and WMA Championships. They shall not be subject to prior achievement of qualifying standards.”

Singapore geezertrackos are trying a work-around — getting Singapore Athletics to take over as the masters track affiliate in WMA. This may take a while — involving a vote of the WMA General Assembly next year in Toronto.

How does SMA defend its moves?

SMA Deputy President Samuel Veera Singaram told a newspaper: “SMA has been strictly told by our adviser to refute all allegations. We will reply accordingly to the parties in the next few days and hold a press conference to address this matter.”

That was Aug. 13. I haven’t seen coverage of a press conference.

The paper also quoted an SMA official as saying: “Any good governance will have a certain percentage of opposition. We are trying to bring the Masters to the next level. We are treating competitions as competitions and not as a holiday. We are representing Singapore and you need to have a certain standard if you are going to represent the country overseas. These people who oppose the direction that SMA is taking are not seeing the efforts made by SMA to be more professional.”

I appreciate the sentiment of making masters more “professional.” But how can they justify telling athletes to leave spouses at home and not being tourists? That’s just nuts.

But a Singapore athlete told me: “We are awaiting SMA to officially announce their final decision by Kannan after attending the last weekend AMA council meeting in Thailand. On the other hand, SA is already following up on the governance issue with SMA too. Will update a clear picture once we have more information.”

In the meantime, be thankful you’re not a masters trackster in Singapore, where the masters Constitution says: “The minimum age shall be 40 for male members and 35 for female members” and the “Team” section of its website says:

“There are many variations of passages of Lorem Ipsum available, but the majority have suffered alteration in some form, by injected humour, or randomised words which don’t look even slightly believable. If you are going to use a passage of Lorem Ipsum, you need to be sure there isn’t anything embarrassing hidden in the middle of text. All the Lorem Ipsum generators on the Internet tend to repeat predefined chunks as necessary, making this the first true generator on the Internet. It uses a dictionary of over 200 Latin words, combined with a handful of model sentence structures, to generate Lorem Ipsum which looks reasonable. The generated Lorem Ipsum is therefore always free from repetition, injected humour, or non-characteristic words etc.”