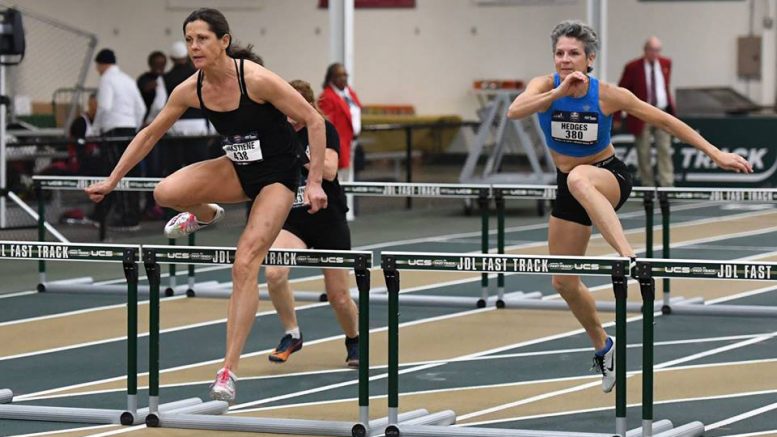 My new hero is W55 Neringa Jakstiene, shown setting the first of her four WRs at nationals. Photo by Rob Jerome, of course

The asterisk tells quite a story. In USATF’s list of world age-group records set at Winston-Salem nationals, the * follows 13 WRs. It notes: “Relays include 5-year age group World and American records for the first time due to new WMA and USATF MTF rules.”

But you have to start somewhere, right? This also could generate new relay excitement. Yes, YOU can hold a masters world record. (Get your paperwork in quick.)

In any case, some incredible individual marks are highlighted by the USATF release after Sunday’s finale:

94-year-old Betty Lindberg (Atlanta, Georgia; Atlanta Track Club) once again stole the show with her second record in her third event of the USATF Masters Indoor Championships. Lindberg crossed the line in the 200m with an American 80-84 age group record time of 1:15.77.

During the first two days of competition, Irene Obera (Fremont, California; Sierra Gold) set two world age group records and an American record, then she returned on day three and set another American record in the women’s 85-89 age group 200m with a time of 53:61.

94-year-old Betty Lindberg (Atlanta, Georgia; Atlanta Track Club) covered a wide range of distances on Saturday. She clocked 21.15 in the 60m and returned to the track a few hours later to set a new 90-94 age group world record in the mile with a time of 15:15.58. Lindberg is scheduled to compete in the 200m on Sunday.

Former Lithuanian athlete Neringa Jakstiene (Memphis, Tennessee), who recently gained U.S. citizenship and now competes as an American will join Team USATF at the World Masters Indoor Championships in Poland. Saturday, she set a new Women’s 55-59 long jump American Record with a jump of 4.95m/16-3. It was her fifth American record of the meet so far, three of which were also Masters world records.

William Clark (Sicklerville, New Jersey) set a new America record in the Men’s 85-89 age group 60m hurdles with a time of 14.15, taking nearly a second off the previous record.

And Rob Jerome deserves no asterisk for his amazing photography from nationals. Give him three gold stars!