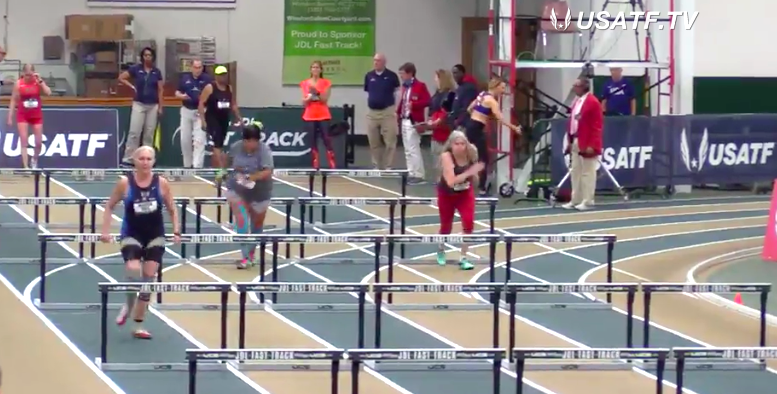 Jane Simpson (in red at right) hurdled in the pentathlon and did more than a dozen other events, including two relays.

As tradition holds, USATF named the star of masters nationals as Athlete of the Week So that means Neringa Jakstiene of Memphis is the choice after shattering four W55 world records at Winston-Salem nationals. I’m still stunned. (I asked for her contact info, and she wrote me. I sent her some Qs. Stay tuned.) But she didn’t win AOW in a walk. She went up against Johnny Gregorek, whose runner-up to the new indoor mile WR was the second-fastest indoor mile in U.S. history (3:49.98 at the Boston University Lehane Mile to narrowly miss Bernard Lagat’s AR of 3:49.89.) Gregorek’s time makes him No. 6 on the world all-time indoor list, USATF says.

Other notable performances from the weekend:

Irene Obera — Obera broke the world masters women’s 85-89 world records in the 400m and long jump and set American records in the 60m and 200m at the USATF Masters Indoor Championships.

Zach Ornelas — Ornelas won the USATF 50K Championship at Caumsett State Park in New York, finishing in 2:50:02 for a 53-second margin of victory.