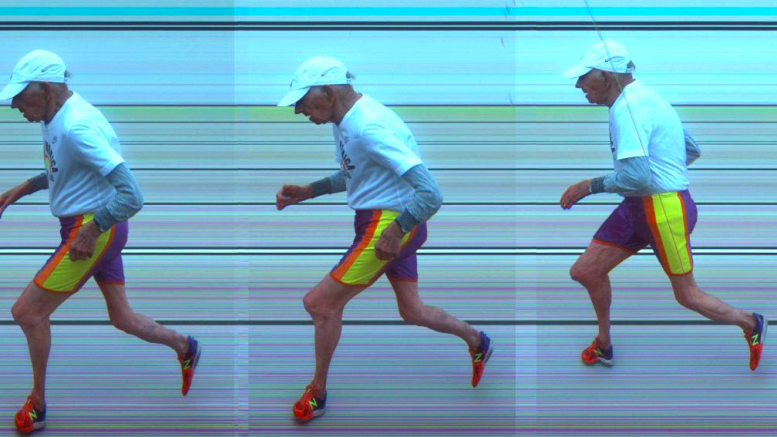 Gunnar is shown in FAT phototimer image being submitted as part of his WR application to USATF.

Besides the fireworks at USATF Indoor Nationals (including 60-meter masters exhibitions and the son of masters runner Joan Hunter winning a national 2-mile title from the “slow” heat), the weekend brought news about a massive outdoor mile WR by a SoCal runner.

Five years ago, I wrote: “M85 distance star Gunnar Linde, a Latvian-born former ski champion in Europe, now lives in Venice, California. He moved to the States in the early 1950s, so he’s a complete Yank. Sunday at the Southern California Indoor Meet … Outdoors (intended to give athletes a chance at distances contested at Boston indoor nationals), he ran the mile in 8:13.43 — beating the listed M85 American outdoor record of 8:22.59 by John Hosner in 2010.”

Attached please find the application for the M90 Mile World Record by Gunnar Linde.  His M85 record set on the same track five years and one day earlier has already been ratified, so the track measurement certification and age verification are already in place.  He also has three steeplechase records and a relay record on file.

The story of this record makes it more amazing. He contacted me in advance to make sure we would be having the event. Since it was the first event of the afternoon program, I told him it would be right on time. He thought he could beat the American record 10:52.98.

We had nice weather in the morning, but as the 1 p.m. start time rolled around it started to rain. Three people started, but the rain got more intense. The other competitors in the race, Jeff Davison and David McLawhorn, didn’t finish. Near the end of his second lap, the rain turned into hail, bouncing off the track.

Even in winter, this is not California weather at sea level. Mr. Linde told me before the race he hates running in the wind. During the race a tent that was weighted down started to move, a hand umbrella bent backwards. That same wind was hitting him in the face on the backstretch.

His daughter … took video on a cell phone. I normally video my meet but under the weather conditions I didn’t want to get my camera ruined. In the hail and wind, his third lap was the slowest. We thought he was slowing down.  Nope, he had a big kick for the last lap and beat the American Record, the ratified world record 10:30.9h and the unratified world’s fastest time 9:56.58 set by Orville Rogers at the 2008 indoor nationals. Linde’s time (was) 9:42.99  After the race, the wind, the hail and the rain stopped and we were back to dry, but cold weather for the rest of the meet.

Back to Staten Island nationals.

Here are the masters marvels: And if anyone is interested in the Vin Lananna soap opera (“when will he become USATF president again?”), here’s my latest report.