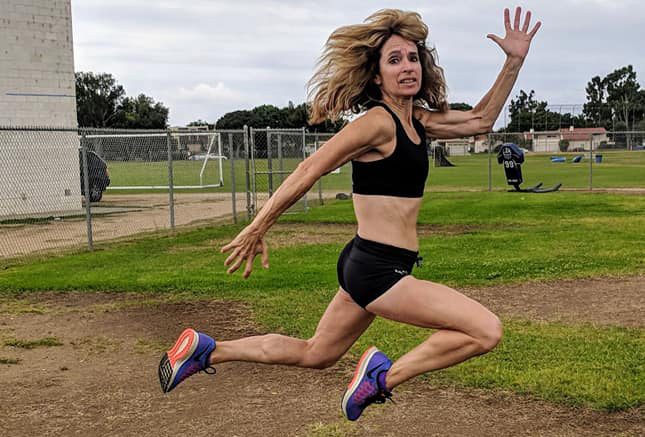 Colleen Barney is ready to fly on reality show where she'll be older than the parents of some of her rivals.

W50 sprinter Colleen Barney has been posting Facebook photos of herself training at a gym — hinting that she’s prepping for “American Ninja Warrior.” Last week, she made it official. She aims to be the best over-50 woman ever to appear on the reality show when she tackles the L.A. Universal Studios course March 6.

She’s not sure if she’s the oldest woman ever invited, “but I do hope to make it further than any woman over 50 has gone (right now that means I have to complete at least the first two obstacles)!” Colleen — already a certified Super Lawyer (estate/trusts/probate expert), supermom and the 2003 Puerto Rico worlds W35 champion at 100 meters — follows in the footsteps of javelin WR woman Linda Cohn, who qualified for “American Gladiators” when she was 40.

I’ve written about Colleen several times, including once quoting a GeezerJock magazine article in 2004:

Barney, who lives in Newport Beach, Calif., had her own hardships to overcome, even if they were in the past. When she was a freshman sprinter at Arizona State University in the mid-1980s, she broke a vertebra during a freak weightlifting accident. The back pain didn’t recede for a decade, and she went more than 15 years without running competitively.

She became an attorney and raised a family. When her daughter, now 9, got interested in running, Barney found herself drawn again to the sport. Despite the layoff, her speed had not left.

In Decatur, the lean but powerful Barney won the gold medal in the women’s 35-39 100 meters with her brown hair flowing behind her.

I recently wrote Colleen, 52, for ANW details, and she graciously replied:

As you might gather from my Facebook posts the past couple of years, I invested in a gym in Newport Beach called GoGoodGuru. We have all sorts of cool equipment and “toys.”

Over the past couple of years, after particularly grueling workouts, I’ve had a number of friends say “this is kind of like Ninja Warrior course” and “Have you ever thought about trying out?”

The truth is that I really never had even given it a thought. I have only ever been a sprinter; never gave another sport even a fleeting try. But I’m always excited to see what I can accomplish physically. So this past fall I figured I would at least apply (never thinking it would go anywhere from there!).

The process is a fairly lengthy written application. They want to know not only about your athleticism, but about your “story.” And I actually thought I have a pretty good story.

Besides my track accomplishments and my legal practice, I told the story of breaking my back in college and being out of sports from 18-35, and what I’ve been able to do since.

I also had to submit a video that gave them a good look at who I am. There’s were certain things they wanted in the video — where you are from, are you married, do you have kids? etc. But otherwise, the video is entirely up to the imagination of the applicant.

I submitted my application over Thanksgiving weekend. The deadline for submissions was January 2. Until the deadline date passed, I had never trained in a real “Ninja” gym with the various obstacles, etc. We … tried a place in Santa Ana, but it was much more parkour them ninja. Four weeks ago I went out to MLab in San Diego with Amanda and Elly to take a Ninja lesson with Arnold Hernandez (who has been in the show three previous seasons).

I’m sure Arnold thought we were three crazy middle-aged women pretending they could do ninja obstacles. I went back the next two weekends (hence the videos you’ve seen on my Facebook page). A week ago Friday, some people started posting on social media that they had gotten “the call” to be on this season’s show for Los Angeles (they call applicants starting first for those that will film here… The first city, and when they are done making those calls they start calling applicants from the next city).

Anyway, after a full week I figured they had already called the 100 contestants that were selected for LA (that’s all they take — 100) and that they didn’t choose me. I worked all day Friday, then went to the gym at 5. At 5:22 (unbeknownst to me, as I work out from 5-6, the call came).

The producer left me a message and asked me to return his call. As soon as I saw I had a voicemail from 818 area code, I started to suspect, but didn’t know for sure. I [got back] to him shortly after 6 and the rest is history. I made the cut!

Most ANW contestants have nicknames, but Colleen hasn’t chosen hers yet. (I suggested American Ninja Sprinter, or something with masters in it.)

She has all the skills, strength and flexibility to master most Season 11 obstacles. But she’s 5-2 1/2 and may have trouble with some that require a long reach. I’d love to see her get to the famed 14-foot-plus “warped wall” — sprint like crazy and hoist herself over the edge.

Women (especially pole vaulters and other track stars) have excelled on the show, including Jessie Graff — shown at the Universal Studios course in 2016:

Not sure which obstacles Colleen will face. But I’m certain she’ll give them her all, and make us proud.