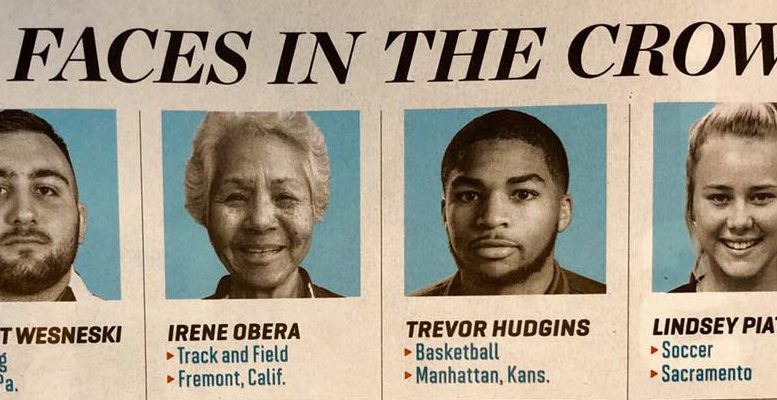 Nearly 57 years after first getting her mugshot in SI, Irene Obera is back in the pages for her track exploits.

The June 18, 1962, issue of Sports Illustrated had an article by Jack Nicklaus advising right-handed golfers how to hit a left-handed shot. Also: full-page ads promoting whiskey and cigarettes (Marlboro and Viceroy) and a blooming sprinter from Northern California in “Faces in the Crowd.” Here’s how Irene is described in the current issue of Sports Illustrated.

It read: “Irene Obera of Berkeley, Calif., has out-sprinted everyone on her home-state tracks this season with three breezy 10.9s and an 11.0 in the 100-yard dash, gives promise of being a front-runner for the AAU women’s nationals next month in Los Angeles.”

Jack Nicklaus doesn’t have much of a game anymore, but Irene does. And she may have set a record even Jack would appreciate — a third appearance in FITC.

In March 2014, SI again featured Irene in “Faces.” But not just a short squib. Under an “Update” tag and the headline “Still Running,” the profile noted her 1962 FITC appearance, Masters Hall of Fame induction and W80 world records.

Forgetting that I had nominated her five years ago, I submitted her name again in early April, writing about her “exploits at the World Masters Athletics Indoor Championships in Torun, Poland, where she set W85 age-group world records at 60 meters, 200 meters and 4×200 relay.”

So I was delighted to learn she’s in “Faces in the Crowd” yet again. Irene was in her late 20s when she first made “Faces in the Crowd.”

4 decades as friends and rivals: Aussie sprinters Kernaghan and Richards