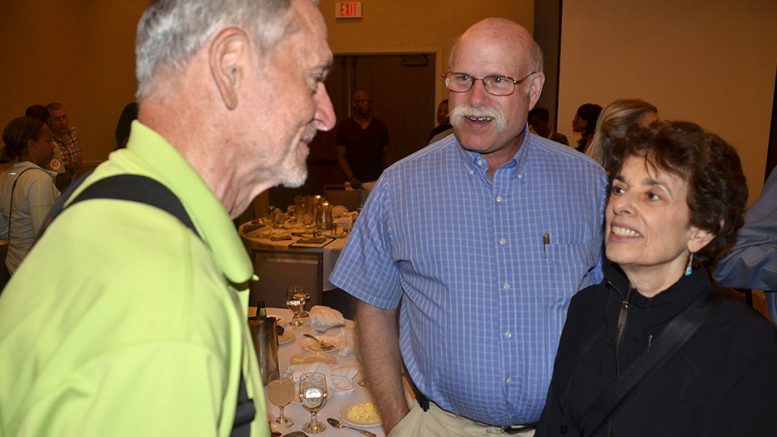 Jerry Bookin-Weiner and his wife, Hedy, chat with the late Rex Harvey at Michigan nationals banquet in 2018.

Reno is a good bet for improving masters communications. Following the 2008 annual meeting there, national masters chair Gary Snyder launched a blog. It didn’t last long, but it showed the way. Later, he and Rex Harvey used National Masters News to report to the masses. And Rex would pop up on Facebook. Rest his soul.

On Saturday, he posted to the USATF Masters group and the larger masters track and field group:

This is the first of what will be a regular series of updates on what is going on in Masters Track & Field. These updates will give us (MTF leadership) an opportunity to communicate with the Masters community in a very timely way with the latest accurate information. If you read it here you can be assured that the information is the latest available and accurate, not hopes, wishes, or speculation, unless it’s labeled as one of those.

To forestall some items being raised for the next update it will include 1) the status of the outdoor nationals in Greensboro, 2) WMA rescheduling (still up in the air but will provide a bit more detail), and 3) recent major rule changes.

For those who don’t know me, I’m Jerry Bookin-Weiner, Interim Chair of the USATF Masters Track & Field (MTF) Committee. I was the Vice Chair for the past three years and assumed the new role when our former Chair, Rex Harvey, passed unexpectedly last December. We all miss him terribly, but fortunately he had made it a point during his three years as Chair to keep me totally in the loop, so the learning curve was fairly smooth and short.

My background is as a masters thrower, though I retired from throwing last year because of long term lower back issues (severe stenosis at four levels). Professionally I am a Middle East historian and retired international educator (international student exchange, curriculum development, study abroad programs, and more) who headed international offices at universities in Virginia (Old Dominion), Massachusetts (Bentley), and Colorado (Colorado State) and ran study abroad programs for American students for two study abroad provider organizations. I retired in 2015 after a career spanning 40 years. Retirement has given me the time to pursue my passion for Masters Track & Field, though I had already held positions as a regional coordinator and throws subcommittee chair beginning in 2002.

With sadness Toronto Athletics Event Management Inc. announced today that it will not pursue a postponement of the World Masters Athletics Championships, originally scheduled for Toronto in the summer of 2020. With governments and corporations struggling with the effects of COVID-19 and the huge toll it is taking on lives and the economy, there seems little chance that a postponed event would have the financial means or the moral backing to provide a meaningful competition.

From the very beginning everyone on our team has worked tirelessly to help organize what we believe would have been the best WMA Championships ever. We had the professionalism, dedication, energy and volunteers to make the experience a memorable one for all participants: athletes, officials, volunteers, organizers and supporters.

Through the last five years we worked past a lot of significant challenges, including losing access to funding and facilities that had been promised. But the creative people on our team found ways around those problems, and discovered hope in many different places. We are forever grateful for the wonderful enthusiasm that our team members brought to their work, and for their enduring support.

In the end, however, we could not find a way past a microscopic enemy that has changed the world.

We look forward to ongoing involvement with Masters Athletics and we encourage the WMA Council to continue its good work on all fronts. We send heart-felt best wishes to all future hosts, and to masters athletes around the world.

Stay safe and stay strong. For Masters Athletics there are NO LIMITS.

In any case, I used the FB reply function to ask Jerry a question: Where can I find minutes of the Reno meeting? Soon communications czar Sandy Triolo posted a link:
usatfmasters.org/wp/2019/12/annual-meeting-2019-reports/

I was struck by the great info — like Spokane bidding for 2022 indoor masters nationals and Lexington, Kentucky, for 2022 outdoor nationals.

Other minutes sparked questions — like the prospect of WMA having a women’s decathlon, a “possible MTF cruise/meet to the Bahamas in 2021 following the National Senior Games (November),” a potential national sponsor for masters track and this:

“The Anti-Doping Committee announced that MTF and MLDR athletes will now be subject to out-of-competition testing.”

Who, what, when, where, why and how — are my first questions.

But let’s encourage Jerry to stay in touch. And not just via Facebook. Some masters aren’t online. Most have email. Fetch that list and make use of it.