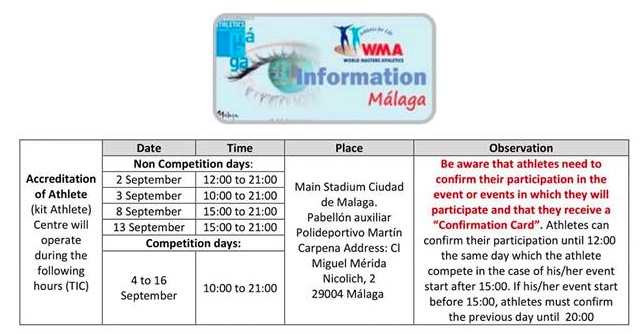 Read the small print (especially the red print) to be prepared for the red tape at Malaga worlds. Declare early and often!

Phil Greenwald, aka USA Masters Team Manager for Life, has posted a reminder on Facebook that all Malaga-goers need to heed: “Note the declaration requirements: By 8 pm for events up to 3 pm (the next day) and by noon for later events (the same day).” So this isn’t your usual masters nationals an-hour-before-the-running-event check-in routine. Email has gone to Americans, but furriners deserve a heads up, too. Rules of the Malaga road.

Darren Scott posted about fellow Brit: “Congratulations to Jon Tilt who has been awarded £100 prize money for his achievement in setting a new M55 400mh British Record with a time of 60.37 seconds knocking 0.97 of the previous mark of 61.34 held by Robert Stevenson in 2008. Jon Tilt was nominated Best Male Performance at the Masters Grand Prix Lee Valley.”