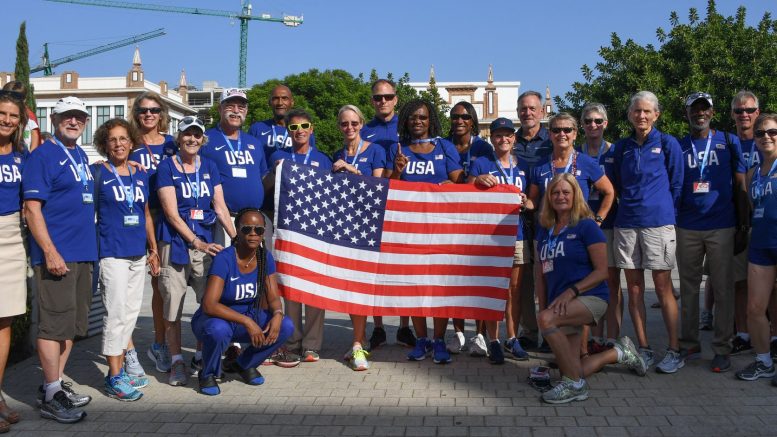 Rob Jerome captured a fraction of the 445 Team USA entrants at Opening Ceremonies. Have a great time, guys!

Malaga worlds begins in a few hours, starting with the W50 hammer. Start lists are up, with results expected early Tuesday. (Malaga is six hours ahead of East Coast time, nine ahead of Left Coast.)

Opening ceremonies pictures are flooding Facebook, and I’m reminded of a great breakdown of entry stats by Dmitry Babenko. His engrossing spreadsheet of the 5,503 men entered and 2,694 women is already out of date, though. Canada’s great W80 multi-eventer Christa Bortignon writes: “I had to cancel Malaga because my husband’s hip problem turned out to be very serious. After several weeks in serious pain and walking with a cane and crutches, an MRI revealed that his right hip was bone-on-bone and he has been scheduled for hip replacement on October 2. In the meantime, he cannot travel.” We saw her in Spokane, so at least she’s had a nice track trip this summer. Sadao Tabira of Japan has endured worse things than 17 events in a single meet. He survived a nuke.

Dmitry notes that the busiest athlete in Spain would be M85 Sadao Tabira of Japan — “doing 17 events!” That’s incredible (and expensive). But I doubt he’ll show for every one. Navigating transit is an event in itself.

So he’s already my hero of the meet — taking an all-you-can-eat approach to the biggest masters meet of the year.

Why so busy? Consider what he’s already survived – the atomic bombing of Nagasaki. After winning three M80 golds at 2013 Porto Alegre worlds, his story was told in a Brazilian paper:

There was no place in the world worse to be on August 9, 1945 than Nagasaki. When the Americans launched the atomic bomb “Fat Man” and it exploded at 600 meters of height of the Japanese city, Sadao Tabira was in the house. Unlike most of his friends and 80,000 other compatriots, he survived one of the most shameful days in human history. After 68 years, the now octagenarian is alive and channeled history for a positive activity in the World Athletics Master.

At age 12, he witnessed one of the greatest barbarities ever committed in wars and decided that he would be one of many responsible for rebuilding the country. Now, at 80, he still feels an obligation to those who have left in the tragedy: “I lost many friends that day and the next. It’s like I have to live everything they have not had a chance to live. ”

From the period after World War II, Sadao recalls all kinds of needs the Japanese have gone through. Remember also to be part of a special generation. “There was no food, we had nothing. But we were from a generation that worked hard to rebuild Japan, “he says, who later became a firefighter at the same time as amateur basketball.

Sadao just stopped putting out fires at age 60. As soon as he retired, he thought of something to keep fit and found the answer in the marathons. “The best thing to maintain health is the medium and long distance races,” teaches the Japanese.

Running for himself and the friends who left in 1945, Sadao began collecting achievements. In Porto Alegre, he won six medals, three of them gold (8km cross country, 10,000m and 5,000m), two silver (1,500m and 800m) and one bronze (4x400m). Plans are to continue on the tracks for at least another ten years. For those who at 80 years of age train six times a week, they are more than likely to achieve the goal.

If you happen to see Sadao, give him an attaboy. He deserves it.