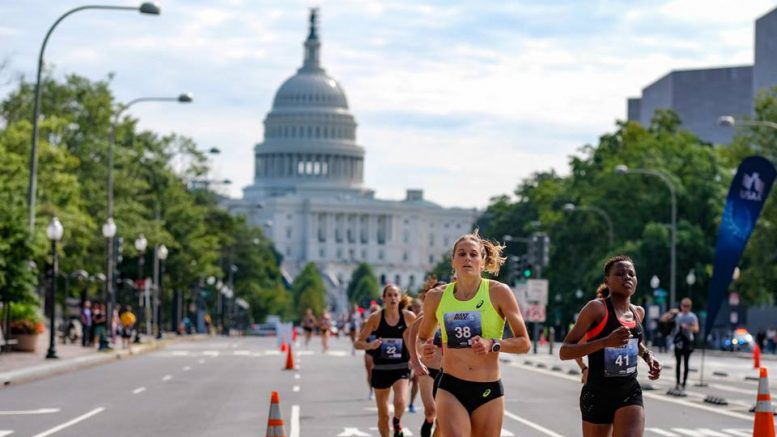 The nation's Capitol looms over Navy Mile, where Sonja set an age-group record. (She's somewhere in back.)

On the final day of Malaga worlds, Courtney Babcock of Canada won the W45 1500 in 4:47.88. That’s the No. 3 time in the world this season, according to mastersrankings.com. No. 1 is the 4:39.15 by American Sonja Friend-Uhl last March. So where was Sonja? At home in Florida, getting ready two weeks later for the Navy Mile on Pennsylvania Avenue in Washington. Her road mile mark of 5:06.33 beat the old course record by more than 10 seconds, and Friday she was named USATF Athlete of the Week.

“She finished 11th in the elite women’s race as she added another national record to the indoor marks she set earlier this year,” USATF noted. In January, she ran an indoor mile in 4:59.99 (and was named USATF Athlete of the Week in February).

On Sunday, Sonja graciously replied to some queries, including why he wasn’t in Spain. She also shared news of a new Facebook group called Competitive Masters Women. (Stay tuned for my reply: Submediocre Masters Men.)

Here’s what she told me:

The 5:06 was not a surprise because I know that I can still run close to a 5:00 mile when I’m aerobically strong, even when I’m not focused on speed or mile specific work. (At least for the near future! ?).

I felt I was fit enough to run something between 4:59 and 5:03. I went out in 73, a few strides behind the lead group, which felt right on. When I lost more contact with that group in front, and had already pulled ahead of the women behind me, I fell off pace. I think that’s where not being sharp and having honed your speed/turnover plays in.

Aerobically I could have stayed on pace (was looking to come through 1/2 mile in 2:27-2:28), but instead fell asleep at the wheel a bit and ran a 79. So the half was 2:32. That woke me up, as well as the fact I could feel (and see) I was gaining on some of the women from the original lead pack.

I went through the turnaround and surged for 100 meters or so, catching a couple of runners by 3/4 mile, which I hit in 3:48. There was another runner about 20 meters in front that I targeted to try to beat to the line. I fell short by about a half a second, but I was grateful to have her there to push me through the finish.

Could I have won the 45-49 1500m at worlds? While I still have the world’s leading time for 2018 in that event, I am experienced enough to know that a race is a race — meaning that it would be presumptuous and unfair of me to say I could have won when I wasn’t there to compete.

I will tell you that I would have 500 percent been in the hunt. I know how to strategically race championship rounds and I have the fitness and turnover range to manage the volume and the surges. The Europeans are very skilled at this and I think in hindsight it’s something perhaps some of our U.S. athletes that do not have that experience could have benefited from (via a premeet round table, coaching, insight from others, etc).

Why I didn’t go to Malaga: I chose to end my 2018 track season at the Portland Track Festival in June, and not go to nationals or worlds for two primary reasons:

1) My family. My daughters are both at ages where they need their mom present, not just passing through, especially during the beginning of the school year. I travel quite a bit for my job (master trainer with Stairmaster & Nautilus) and when you add that time away to the meets I race in all year, plus the meets I coach with FAU, it can get to be a lot. My oldest leaves for college next and I made a commitment to put her first this year as much as I could.

2) My health. I had been struggling with overall fatigue and just feeling “off” somehow since May. When I raced that masters mile in Portland, I was so detached emotionally and physically from that race. By that point. my body was on autopilot, doing what it knew to do (mechanically), but with no fire or zeal.

I was burned out from trying to keep myself “up” and knew it was time for a break. What I found out after blood work a few weeks ago is that my thyroid is functioning well below normal. I had minor issues with this in the past and was being monitored, but it had taken a plunge since April (coincidentally the last time I felt good!).

I’m on new medicine for that and will be monitored via labs every six weeks for awhile to make sure it’s improving. I also started acupuncture, which I believe will be holistically healing, long term.

Masters female runners (mostly ages 40-55) deal with a tremendous amount of challenges via hormonal shifts. There really isn’t enough resources or info out there unless you dig it up. We are starting to talk amongst ourselves more and support each other, so I hope we can change this for the better for aging female competitive runners in the future.
For the rest of this year and early 2019: I have another XC meet I’ll race with FAU next weekend, then a road 10K in November, and a few more road races in December and January.

Indoor track is definitely on the schedule for January into March as well as USATF XC Nationals in Tallahassee in early February. Indoor worlds is a possibility, but it will depend on family and work schedules.

I am learning to take it one season at a time, so I don’t want to jump too much farther ahead than that!