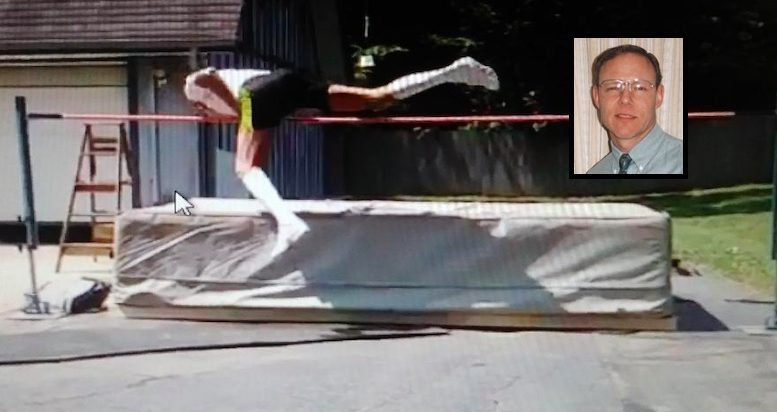 In the summer of 1971, the NAIA Outdoor track championships were held in Billings, Montana, and a second-place Sioux Falls College high jumper was interviewed by long jump legend Ralph Boston for a tape-delayed episode of “CBS Sports Spectacular.”

“My last cleared height was shown on TV in about August or September of ’71 when this was broadcast,” writes Steve Hackel. “To my knowledge, this is the only video of my jumping that might still exist.”

So nearly M70 Steve, making a comeback after 26 years, wrote me for help in digging up the clip of his jump.

“I am wondering if you have any connections with someone from CBS that might be willing to look for this 6- or 7-second bit of film history in their archives,” Steve says. “Personally if would mean a lot to me, and I have wanted to use this in my current training stages for comparison of then and now, and my sons have never even seen me jump till we recorded a few clips from my back yard this summer (bought a pit, bought a bar, built my standards and found 75 feet of industrial conveyor belting for a runway).”

Steve says he has fewer than 10 pictures of himself jumping during his prime, “and now I have phone videos, GoPro videos, still pictures, and one of the boys is working on a digital conversion of a video jump into a 3D animated stick figure reproduction.”

At his alma mater (now called the University of Sioux Falls), Steve is a member of its Athletic Hall of Fame, which profiled him:

One of school’s all-time greats in the jumps, Hackel still holds four records at USF, including the indoor high jump mark of 6-9 as well as the outdoor high jump mark of 6-9 3/8. He owns the outdoor mark of 23-9½ in the long jump and the school’s outdoor triple jump mark of 46’10 which was set in 1971. Named an NAIA All-American in the high jump in 1971, he set a District 12 record in that event and won a conference title. He competed at the NAIA nationals in 1971 and later at the USSR/USA meet as well as the Millrose Games. Hackel earned a degree in health, physical education from USF in 1971. He and his wife, Pat, have a son and live in Midlothian, Ill.

About 13 months ago, Steve says, he was tested for fitness after having worked out for about 10 months before the Hall of Fame induction. He had a vertical jump of slightly more than 4 inches.

Two weeks ago, he was retested and found to have increased his jump to 15 inches, “and other physical and mechanical things have gotten much better over this past year too.”

“Seriously, I am asking a lot of my body, Achilles tendon, when trying to do this, but I know others that have hurt themselves playing golf. I remember asking the doctors 26 years ago – point blank – if I would ever be able to jump again, and their response was ‘You’ll be lucky to even walk right again.’

“One of the doctors suggested a different type of then experimental repair, and he was on the cumulative team that worked on Dan Marino when he ruptured his [tendon] playing football.”

Steve likens his love of high jumping as “more of an addiction than anything else … even though the heights today are nearly 3 feet lower than what I clocked out at.

Now he feels there is nowhere for him to go but up.

But he’s had problems finding places to train. He writes:

It’s a sad commentary on how the schools and the system treat so many of us ‘old farts’ when we can help younger athletes to achieve some of their goals. I had tried all the local schools — grammar, high, junior college and college — and all of them declined me the opportunity to trade some of my coaching skills for a few jumps over a crossbar with potential record holders, always issues with insurance. That was the main reason I searched for 7 or 8 months on the Internet to luckily find a landing pit in Minneapolis Minn., drove all the way there and back round trip nonstop, just so I could have the opportunity to once again jump and continue living my dreams.

I don’t think I will threaten the current masters world record, but there are only a dozen ahead of me on the rankings list – and I move to the next group in 6 weeks time.

I’ll write CBS about Steve’s dream of seeing the 1971 video, but if you have any contacts with network, send them link to this post and kindly ask for help.

And a merry masters Christmas to all!