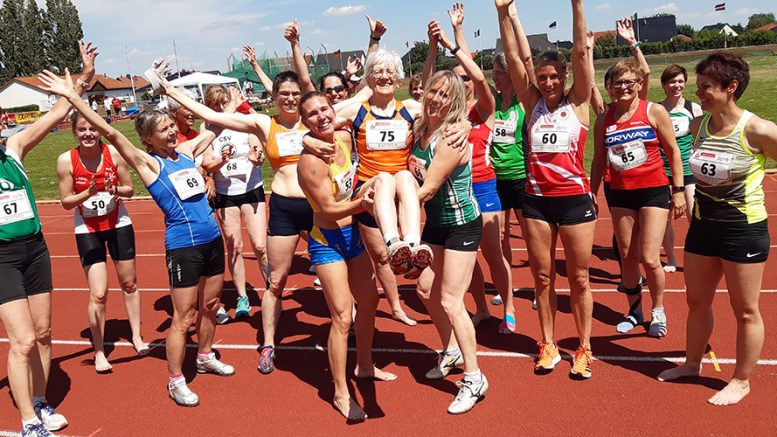 Riet Jonkers Slegers, held in the middle, scored the highest heptathlon mark in masters history over the weekend.

Three monster world records were set over the weekend, with celebrations (and stories) promising to continue for days. The first came Friday night when our friend Brad Barton of Utah battled fellow M50 Shane Healy of Ireland in the mile at the legendary-for-records Music City Distance Carnival at Vanderbilt University in Nashville. (Anthony Whiteman ran his M40 3:58.79 mile WR there in 2012, you’ll recall.) Shane and Brad became fast friends in Nashville as both broke the M50 mile world record.

But this is the only story you’ll read that mentions Shane except in passing.

That’s because Brad kicked past Shane after the bell, ran a final 440 in 61.89 and finished in an impossible-by-humanoid-standards 4:19.59 in his first track race in nearly three years. (Long story behind this, which I plan to tell in Times of San Diego.)

“Yes, Shane and I spoke about pacing before the race,” Brad told me. “The way it turned out helped me a lot.”

On Saturday night (after I came home from the Pasadena Senior Games, where my 100 time wouldn’t have kept up with any of his splits), I had a long phone chat with Brad, whose M45 WR attempt I covered in 2014.

My coach, Chick Hislop, and I have been on a nearly four-year mission to get me to this starting line. I have been world-record fit three separate times (all cut short by injuries) leading up to this current months-long training cycle, all for a chance at this mile world record.

Race director Dave Milner was behind tonight‘s effort all the way. He crowd-source funded Shane‘s ticket from Ireland and arranged for early pacing work from Jay Stephenson.

Jay did a nice job for us and Shane was a great help to me as well. I know he really wanted to win this race and claim this record having traveled from Ireland to do it. We both bested Nolan’s impressive mark and Shane was very gracious.

Shane was wonderful with me. We decided to take our warm up together and get to know each other a bit. I think it helped us both to settle our pre race nerves.

The first lap felt very comfortable. When we saw our modest 400 split, Jay poured it on a bit heading into lap two. He put on another surge at about 750, having realized we were going to be slower than intended at 800. I made a conscious choice to let them go a bit, opting for a smoother acceleration. They came back to me just before our rabbit stepped away and let Shane go at about 1100.

The longest thing I’ve done in training at this pace is 600, so at the bell I was feeling quite stretched out having not raced since the 2016 Olympic Trials exhibition.

Seeing our split, I knew we were both going to get that record. Down the backstretch, I was thinking that this man has better leg speed than I do so I felt it prudent to try to pass Shane at 250 to go. I redoubled with 200 left and just enjoyed feeling a rare glimpse of youth to the finish. Oh, what a feeling!

I am filled with gratitude for my friend Nolan Shaheed for setting such a high bar for us M50s, for race director Dave Milner, our rabbit Jay Stevenson and especially Irish mile legend Shane Healy. My wife, Melissa, well deserves my thanks and praise for her huge support.

And to my coach, Chick Hislop, I say that this accomplishment belongs to both of us.

Now the other Godzilla news: Two legends — Rolf Geese of Germany and Riet Jonkers Slegers of Holland — set world records in the 75-79 group at the annual Stendaler Hanse Cup combined-events meet in Germany.

But even Rolf can’t touch Riet’s effort in the heptathlon, where she scored 6870 points to beat the listed W75 WR of 6658 by Austria’s Marianne Maier. That 6870 also beat the all-time-best-masters-hep-WR mark of 6860 by W35 Sabine Braun of Germany. More yowza!

The other news out of Stendal is that Phil Raschker, reportedly injured, still armed the 500g javelin 15.26 meters (a little over 50 feet). I’m sure she can do better when healthy. Hope she’s recovered for National Senior Games in a couple weeks.

Until then, keep cranking out those WRs, people!