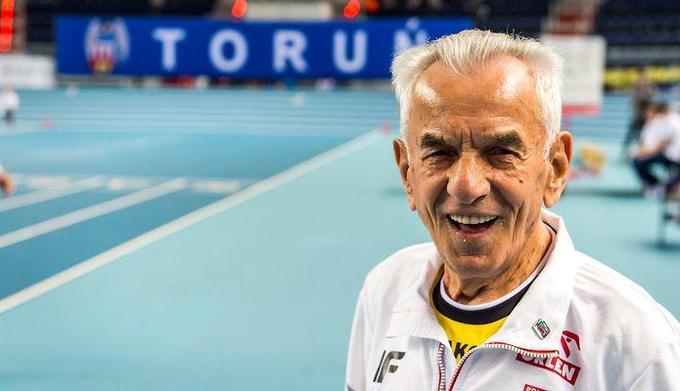 Stanisław Kowalski of Poland turned 110 on April 14, 2020, but doesn't (yet) have competition in mind. Cross fingers.

Lift a glass for Stanisław Kowalski of Poland. Tuesday he turned 110, potentially becoming the first masters trackster in that virgin age group.

Although a Polish masters track post on Facebook indicates that he is “no longer in competition,” it says he still has a “lot of positive energy and sense of humor.” That’s enough to give me hope that someday, when The Beast is vanquished, he’ll enter a sanctioned meet and set as many M110 world records as he wants.

Someone once told me that the oldest master wins. Period. That would make Stan our sport’s ultimate champion. Just lace up your spikes or heave a shot, Stan. You are in our hearts.

Today, April 14, 110th birthday celebrates our first born representative, probably the oldest athlete in the world, who shows that it’s never too late for sport – Stanisław Kowalski from świdnica!

Stanisław Kowalski was born on April 14, 1910 in the horse district. He worked as a trainman and a founder. He started the first time at the age of 104 at the age of 104! He has never trained athletics or any other sport before, and over the years his only constant physical activity was commuting to work on a bike. Jednośladu also did not abandon his retirement. After my 90th birthday, we would still travel like this a few kilometers every day, going to the cemetery to the dead wife.

He is probably the oldest athlete in the world to take part in the official 60 metres event, 100 metres, 100 metres, disc throw and shot shot. Here’s a list of his most important achievements and current world and European Records:

It was loud about its launch and launch in our company, not only throughout Poland, but on practically all continents. Silhouette P. Stanisław Kowalski is a polish film film directed by Stanisław Kowalski. “Golden age”, which has been broadcast on several television channels including m. In. On tvp sport and tvp info. The authors of this material are the press secretary of our relationship – tomasz niejadlik and Jakub Fiderewicz.

Stanisław Kowalski was registered for the start in our 8. Indoor World Masters Championships. Unfortunately, from the start in wmaci 2019 he was infected with a minor infection.

Although he is no longer in competition, he still has a lot of positive energy and sense of humor. There are no serious health problems. He’s still trying to be physically active, pulls him into outdoor movement. The biggest obstacle to this at this moment is… Ongoing Pandemic Koronawirusa.

What is undoubtedly worth to highlight stanisław kowalski is currently also the oldest man living in Poland and the oldest resident of the province of wrocław.

2 Comments on "Stanisław Kowalski turns 110, could be first athlete ever in that milestone age group"