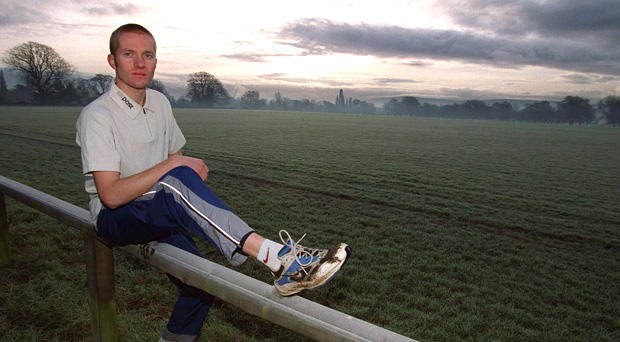 Andrew Walker, shown in 2001, could be the comeback story of 2020 worlds if his rehab works out.

Irish media and a crowd-funding site are sharing the tragic story of one-time sub-4 miler Andrew Walker, 41, who had been training for 2020 Toronto worlds. “The Kildare native is out of immediate danger but suffered multiple injuries including broken ribs and sternum. He also damaged his spleen, lungs and heart but is now recovering after undergoing surgery,” The Independent said of his Saturday injury.

GoGetFunding.com said: “Andrew was hit by a car in his adopted home of Santa Brigída in Gran Canaria, leaving him in a critical condition with multiple internal injuries and shattered bones. His lungs and spleen are very badly damaged. But for those of you who know him, or those who have had the opportunity to race against him, you will know how strong and single-minded he is. Andrew is now off life-support and has stabilised well from his multiple surgeries and is on the slow road to recovery.”

Be the first to comment on "Irish sub-4 miler aiming for 2020 Toronto worlds, if he can overcome injuries"