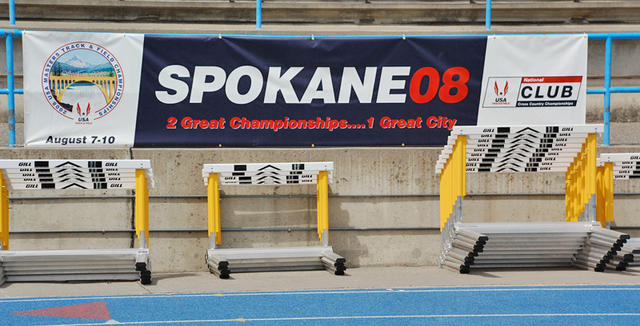 Starting in 1968 (yes, 50 years ago), seven of the first 10 masters outdoor nationals were held on the West Coast — six in David Pain’s home of San Diego and once in Gresham, Oregon. But in the past 20 years, the Left Coast has hosted our showcase meet only four times — Sacramento 2010, Spokane 2008 and Eugene 2003 and 2000. (I don’t count mid-Pacific Honolulu 2005.) So cry me a river when people complain about the cost of 2018 Spokane nationals. Some are griping about this year’s locale on Facebook. But the ones on the East Coast have been much closer to the Midwest and Southern nationals since the Left Coast’s last meet. Spokane was chosen in 2016 — a year after nobody bid for outdoor nationals in 2015. So we gotta be grateful Spokane stepped up to the plate. Ames, Iowa, will host 2019 outdoor nationals. 2020 hasn’t been chosen. But maybe Eugene could be recruited, since the Oregonians say they’ll be ready for the Olympic Trials. While waiting, check out my photos from Spokane 2008.

Masters nationals in India are all over the map — and calendar