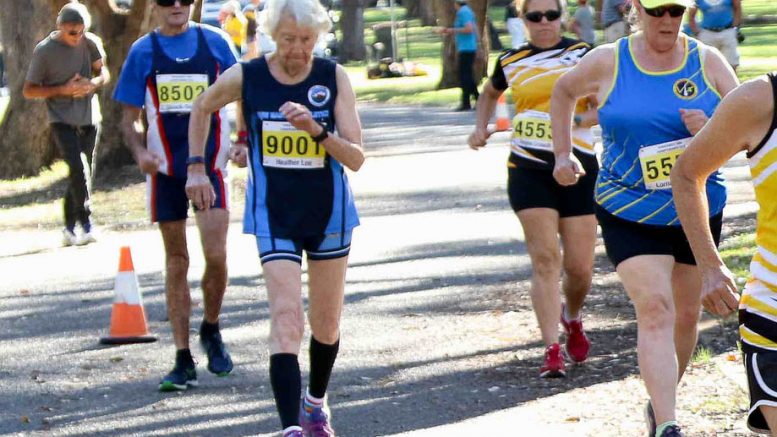 Heather on way to Commonwealth Games. Photo via Simon Butler-White

Simon Butler-White, our Aussie stringer, reports that New South Wales race walker Heather Lee “sliced and diced” two W90 world records at last weekend’s Australian masters nationals in Perth. She took down WRs in the 10K road walk and 5000 track walk. Simon writes: “Heather, 91, set world records in the 3000 (24:56.97) and 5000 (42:36.49) walks at the Australian Masters Games in Tasmania just last October but was determined to secure the ‘missing’ 10K WR that would give her the trifecta of W90 marks. The WR over that distance – 1:31:21 – was set by Romania’s Elena Pagu at the WMA World Championships in Perth in 2016. Heather’s time on April 29 was 1:25:28 – bettering the European’s WR by nearly 6 minutes. Two days earlier, on Day 2 the four-day championships, Heather lowered her own 5000 record by a minute and a half – to 41:04.87. Despite the 10K being held on a five-lap course Heather described as ‘rough,’ the Sydneysider says she knew during the race that she was well inside the record and was over the moon with her time.” Heather said: “It was unbelievable I felt tremendous pride – and satisfaction that all the hard training these past months was well worth the effort.” Simon also says: “It’s been a great 2018 for Heather so far. In addition to having her two October 2017 world records ratified by the WMA, she was thrilled to be chosen as one of the baton carriers in the Queen’s Baton Relay when it passed through Sydney in February ahead of the XXII Commonwealth Games on Queensland’s Gold Coast in April.” Masters nationals in India are all over the map — and calendar

Be the first to comment on "W90 Heather Lee adds 10K walk WR to stockpile, lowers own 5K record"