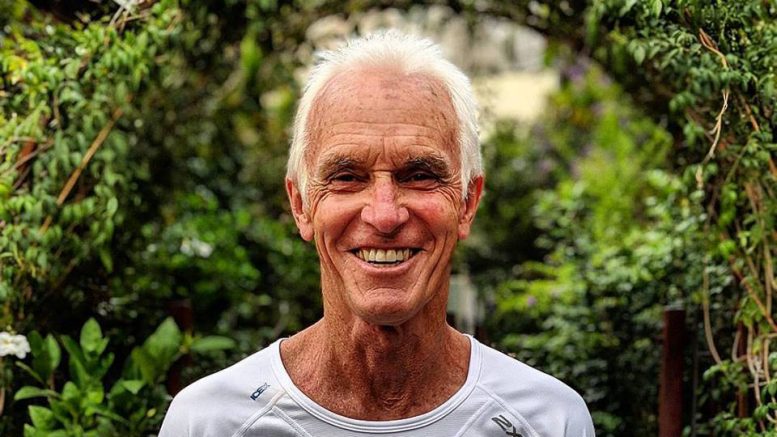 Peter Crombie has won more world medals than anyone in masters history, according to one account.

Sprinter Peter Crombie, born Christmas Day 1944, is Australia’s gift to masters track. I’ve seen him run for decades (especially at USA masters nationals), and yet didn’t really appreciate his massive dominance. And now The Guardian shares a stat new to me: He’s won a medal in every sprint event in which he’s competed since 1987.

“He holds an unparalleled 19 indoor and outdoor track records, and has taken home 20 medals from outdoor world titles,” says the profile. “He has won a remarkable 65 medals in world events – more than anyone in masters history. It’s gotten to the point where he needs a system to categorise and store them all.”

Peter is the most prolific medal winner in World Championship history. He has achieved the most medals indoors in the 200m (6) and 400m (6), and the most medals outdoors in the 400m with 9 medals. His 41 individual medals and 24 relay medals makes a total of 65 world sprint medals, and is ahead of the next best athlete in history of 51 in total.

Whilst Peter may lack the individual brilliance of some of the other male sprint superstars like Reg Austin, he more than makes up for with his dogged all-round sprint performances over all three sprint distances and relays at each World Titles, to make him the ultimate sprint all-rounder.

He’s been named IAAF Masters Athlete of the Year (2010). No surprise on these. But a year ago, flying under my radar, came an ultimate honor. Or honour.

“Recognition outside the circuit can be difficult to come by for masters athletes, but Crombie’s achievements have been recognised on a wider stage as well. In January he was awarded a Medal of the Order of Australia for his services to athletics. It’s a measure of Crombie’s influence that his contribution has begun to be acknowledged at a broader level.”

His son Steve noted the moment:

Finally, we learn it hasn’t been easy:

In 2009 Peter had a major knee operation and was told by his doctors that he would never compete again. With his never say die attitude he overcame that difficulty to come back and win multiple sprint gold medals in the recent World Indoors in Kamloops as well as the 2010 US National Titles. In the US he beat the current US Indoor and Outdoor M65 sprint world record holders over the 100 metres and 200 metres both in a National record.

Ralph Romain dies at 88; lanky Trinidad sprinter was WR legend at 200 and 400

4 Comments on "Peter Crombie, World Masters Athlete of the Millennium? Champion of champions is 74"