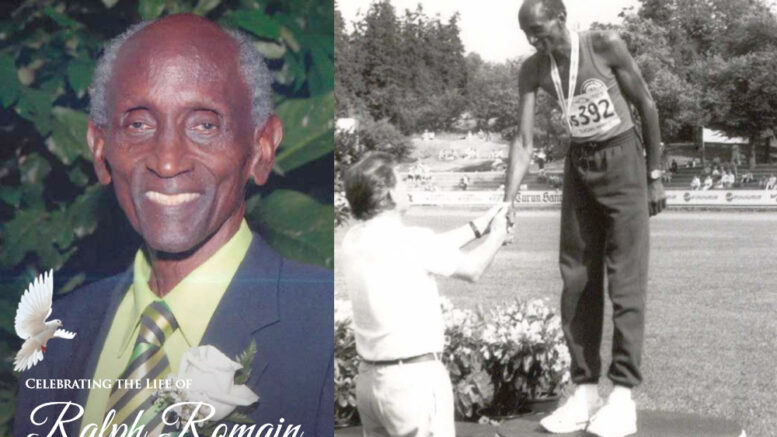 Ralph Romain is shown accepting the gold medal for winning the M55 400 in 53.41 at the 1991 WAVA World Veterans Championships in Turku, Finland.

Ralph Irving Romain was an education expert who worked for the World Bank and UNESCO. He taught history at New York’s Medgar Evers College of CUNY. In the 1960s, not long after his native Trinidad and Tobago gained independence from the UK, Ralph was the Caribbean nation’s education minister, writing a 15-year plan through 1983.

“Equipped with training at the graduate level at Cambridge University, Romain took on the challenge of creating an educational system designed to allow equal opportunity to quality education for all the children of the country,” wrote Ralph Henry in the nation’s oldest newspaper. “He was fired by the idea that the future of the country was carried in the book bag of students.” Ralph should be revered as much for his world education expertise as his track speed. Check out his report to the World Bank.

Sadly, Ralph Romain was fired as a “permanent secretary” of education when his plans ran afoul of the church schools that dominated his nation. He was demoted to “special adviser” and given a desk “somewhere else in the bureaucracy.”

In 1990, he filed a complaint against the United Nations Educational, Scientific and Cultural Organization after not being reappointed to his job as director of the Educational Financing Division of the Paris-based International Bank for Reconstruction and Development, aka World Bank. He lost his case.

But Ralph — who died of a heart attack May 23 after suffering from dementia for a decade — didn’t lose his athletic fire.

But memories of his magnificence are still fresh.

Fellow WR man Steve Robbins told me: “I only talked to Ralph a few times. He was incredibly nice but reserved. I loved watching him run the 2 and 4. He’d give up 10 meters or so to the competition in the first 50, then he would unwind those long legs and he would begin eating up ground. He ran so smooth and effortlessly. He was a class-guy and one of the major stars of masters track.” Aussie sprint legend Peter Crombie recalled: “Ralph Romain ran one of the most incredible 400m races I have ever seen during the world titles in Turku Finland in 1991-M55. I saw this tall streak standing at the start of the race with his hammy all bandaged. I presume he couldn’t get down. He started the race in what seemed a stroll where he was behind others and gradually built up speed down the back straight with very long strides which seemed to be overstriding. At the 200m he was probably just in front and then he left them all to win by almost 3 seconds in 53.41. Reg Austin won the M50 age group in 53.63 and he was a world superstar in the lower age group. Ralph was 59 and was actually 60 on the day of the race, but had to run in the 55 age group because he was there at the first day of the meet. So he broke a M60 WR in a M55 race.

In November 1992, Jerry Wojcik wrote in National Masters News: “Ralph Romain, 60, of Trinidad and Tobago didn’t let a pouring rain that moved the high jump indoors deter him from a world record at the Potomac Valley Games in Alexandria, Va., on September 6. Romain, who holds the M55-59 world record at 52.6, broke the M60-64 record for the 400 with a hand-timed 54.6.”

Ralph’s daughter Jacqueline — one of seven kids — informed me of Ralph’s passing and added other details.

“He lived in Curepe, Trinidad, and died in St. Joseph, Trinidad, after a heart attack. He had had dementia for over 10 years. He was retired from the World Bank in Washington, D.C, working in their education department. Before that, he taught history at Medgar Evers College in NYC and was also the permanent secretary of the Ministry of Education in Trinidad in the 1960s. He also spent two years at UNESCO in Paris in the late 1980s. His funeral service was held on June 1 in Trinidad and a second memorial service was held on June 5, also in Trinidad. Besides running he loved growing fruits and vegetables and even bred dobermans!”

In a YouTube video of the June 5 live-streamed service, daughter Lesli said Ralph had a hot temper but “if you had a fat tire, he would help.” He had lived in the United States, including Florida, but returned to Trinidad. By 2009, his decline in mental acuity was noticed and he was diagnosed with Alzheimer’s in 2010.

He “made me a more serious, responsible person,” Lesli said. She saw her late mother and Ralph in heaven “passing the crossword puzzle back and forth and taking walks.”

His T&T obituary mentioned his survivors, but not all of them.

“Please note that the mother of all his children was Merle Romain (who unfortunately passed away on April 7, 2021),” Jacqueline wrote me. “The woman listed as his wife was his second wife (but that’s a whole other story). He also had 12 grandchildren and 2 great-grandchildren.”

As usual, when a masters track great goes to the big meet in the sky, there’s always a “whole other story.” I’m glad I learned more of Ralph’s.

Peter Crombie, World Masters Athlete of the Millennium? Champion of champions is 74

Sing along with lyrical Dave Ortman: ‘Keep running through, Just like you always do.’