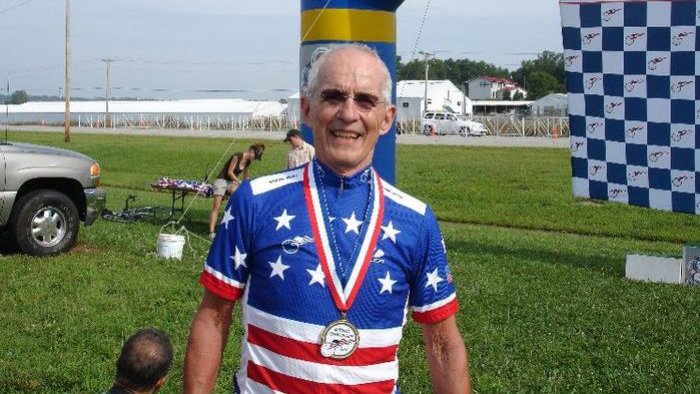 Carl Grove was stripped of his national title after testing positive for the metabolite epitrenbolone, USADA said.

The sport of cycling, like the nation of Germany, is rightfully ashamed of its doping history. But that has led to some crazy superstrict policies. One has gotten a lot of attention: the loss of an M90 world record in the 2-kilometer individual pursuit at the unfortunately named Masters Track National Championships. (My local paper reported the case without mentioning the sport!) Carl Grove of Indiana, the gent who accepted a public warning, apparently ate contaminated meat the night before his July WR.

USA Cycling drug-tests everyone who sets a world record.

The Guardian newspaper said: “Grove told the Associated Press this week that he believes taxpayers’ money would be better spent on catching more serious offenders. “Us old guys are kind of like peanuts. I think that they’re wasting their time,” he said. “What can I gain at 90 years old doing drugs? Tell me, I just don’t know. So I think that somewhere there ought to be a cutoff and they ought to zero in on the stuff that is done for money reasons or whatever it may be. But I think after 65 or 70, you know, they ought to just give up.”

My thought exactly. Which is why I posted this comment on Facebook: “I saw this days ago and laughed. Nobody at this age should be subject to drug-testing humiliation and shame. Luckily, he got off with a warning. But what nonsense that he be subject to doping control.”

Eddie Seese replied: “what’s the next exception? Should I get an exception since I take testosterone to keep my levels in band so I can recover from daily life, stay a man, keep my energy level, and maintain a sex drive?”

To which I parried: “Slippery slope arguments don’t impress me. NRA uses them too. Also anti-LGBT folks (man-on-dog fears)”

But the biggest hoot came from USADA chief Travis Tygart, who was quoted as saying: “Under the sport’s rules, and track and field has a similar rule, in order for a world record to be ratified, the individual who broke the record has to be tested. If you look at [Grove’s] testing history on our website, you can see we’ve tested him, it looks like, six times now dating back to 2012. All of these have been because he’s set a world record.”

Rex Harvey, our national masters chair, told me: “He is definitely wrong about Masters Track & Field testing all world record (setters). They do not.” But later he said: “If that is cycling’s rule, and I understand it is, then of course they have to test him.”

On Facebook, I was asked what age should be the end of masters track drug-testing. I suggested 85 (with an exception carved out for me at 65 this summer.)

But what do you think?