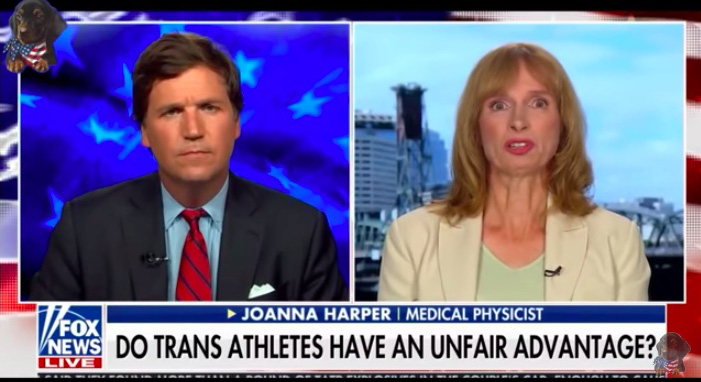 The post three years ago was occasioned by an amazing piece Joanna wrote for The Washington Post, which included this passage:

My research, published last month in the Journal of Sporting Cultures and Identities, found that collectively, the eight [male-becoming-female] subjects got much slower after their gender transitions and put up nearly identical age-graded scores as men and as women, meaning they were equally — but no more — competitive in their new gender category. (The outlier was a runner who had raced recreationally as a 19-year-old male and became serious about the sport — doubling her training load and shedding 22 pounds — years later as a female.)

With M45 wingnut Tucker (a former San Diegan, but don’t blame me ), Joanna said trans athletes in high school shouldn’t be eligible for state-meet titles. That took the steam out of Tucker’s plan to mock her stance.

When Carlson disagrees with a guest, which is his favorite pastime, he is quick to jump on them. This time he was completely shocked that Harper suddenly turned her direction and made his own point for him.

Carlson was silent for exactly 1.6 seconds, a Fox News record for the host.

He was clearly taken aback by Harper’s even-handedness on the issue, something she has genuinely developed over time. She truly believes that trans athletes, even in high school, should face some mandated hormone therapy to win trophies in girls sports. It’s a position with which various LGBTQ advocates disagree.

The bottom line: I’m sorry for Tucker’s booker, who didn’t warn the boss. Joanna avoided becoming a foil for ridicule (except in the insane YouTube comments).

A perceptive comment on YouTube: “I love that Tucker the douchebag was so ready to rip her, and then she basically agrees with him, and the idiot is left speechless multiple times.”﻿