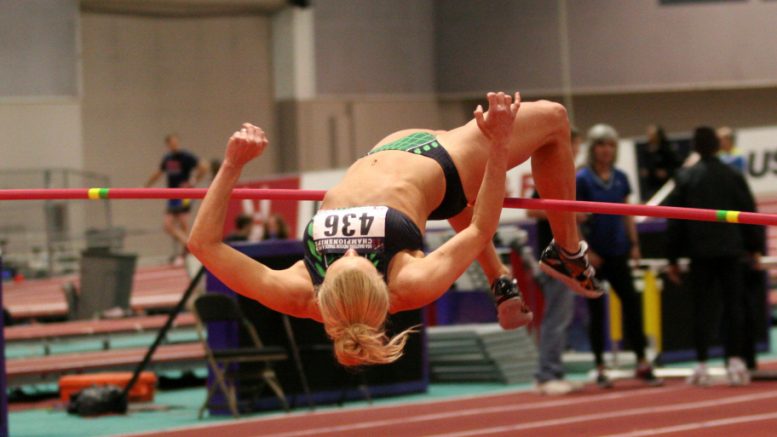 Martha was a model jumper and continues to be a marvelous flop coach in Seattle area.

You can take the girl out of the high jump but not high jump out of the girl. So it goes for world champion Martha Mendenhall of Tacoma, who may be retired from competition but still in the game. Big time. Her latest effort is coaching the well-named “Flop House” High Jump Club, which invites masters athletes. Coach Martha, with one of her charges, has USATF Level 3 certification as well.

“Only one [masters member] so far and he is from Oregon,” Martha says. “Tacoma doesn’t have a lot of, if any, masters high jumpers that I know of. There are a few in the Seattle area and I’m hoping as my “Flop House” gets more popular that they will come down. I’d like to offer a couple of jump sessions just for masters men and women.”

She’s mindful that in her 25-year local competitive career, she’s jumped with almost no competition and practiced alone.

Her club — established at an indoor facility at 815 S 28th Street, #B in Tacoma — aims to fix that. She has a spiffy website, too.

I noted her retirement announcement in October 2014, where she told me: “I will definitely miss the friends I have made over the years. Friends from all over the world really. Secondly, I will miss the competition. It is such a part of who I am. It has been the one constant in my life since childhood. It’s not just a hobby, or something that I do. It’s a huge part of who I am.”

The club (and her great Facebook feed) will keep her connected.

My quickie Q&A with ever-gracious Martha:

Martha Mendenhall: As you know, I had both my hips replaced in 2013 right after the world meet in Brazil. About two years later I tore some scar tissue in my left hip and it tore a little of my hip flexor. That has plagued me ever since. That is the only injury I’ve had that I can say affects my training and performance. Do you demonstrate the flop at practice?

Of course! It comes with a disclaimer though: “I’m 60! And I’ve had both hips replaced!” Ha ha! People read about my career in track and field and they have expectations that I am going to jump like Amy Acuff or Chaunte Lowe. It makes me laugh a bit. I am able to demonstrate most all of the running drills and high jump specific drills and exercises.

All of the Dick Fosbury stories that I know are the ones we have all heard about over the years regarding his amazing, but accidental, pioneering high jump technique. Not to put in a shameless plug but, if you really want to know about his life and career, his book “The Foz” is really fantastic. I got it from Amazon as soon as it was on pre-order and I laughed and cried. I learned so much about him as a young man and it explained so much about what influenced the person that he is today. It also is a great history lesson about the climate of our society with regard to the racial struggles going on in 1968.

Dick was my inspiration and my idol as a very young high jumper (sixth grade in Texas). That was when I learned to high jump. I was taught to “Flop” because of Dick’s nfluence in our sport.

I decided about six years ago that I wanted to have an indoor high jump facility (the weather here will make you dream of stuff like that). After doing a feasibility study, and consulting with many coaches who have opened their own facilities, I realized that the time was not right back then. The city of Tacoma was not a “Track and Field” town. Track and Field was not a well supported sport here. YET.

This past summer, my interest was renewed in opening an indoor high jump club/gym, when the possibility of a greater vision came about. Going in with Pat Licari (pole vault) and Nate Wilford (LJ/TJ) and opening a facility that would house all of the jumps! That is the Grand Plan for the future. Until we can find the building that we want, we are all operating our clubs out of separate facilities.

Coaching anything else but high jump?

I may be coaching all of the jumps for men and women again this year at Stadium High School here in Tacoma. We are talking about that at this time. I have my hands pretty full with the “Flop House” so it’s up in the air right now.

No, but I know there are some great masters straddlers still around.

College — 5-9.75. But remember: That was in 1977. My college did not even have a women’s team. I was the only girl on the men’s team, as I was in high school too. The coach basically tolerated me because he had to with the new Title IX ruling. I had zero coaching, but a lot of fun!

On Valentine’s Day 2019, we celebrate masters’ love for a certain sport. No question a certain event has a love for Martha Mendenhall.

Her facility in action: