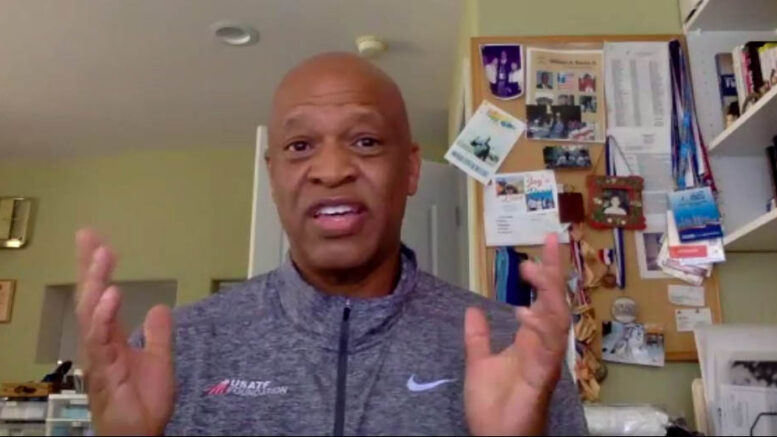 Monday’s Zoom session featuring Dick Fosbury, Linda Cohn and Willie Banks was happiness and light, with lots of helpful and inspirational nuggets. But my head snapped at one point when Willie, smiling and upbeat, matter of factly mentioned in passing that he had COVID-19 in December.

He never returned to the subject, so I wrote him the next day. Did I hear you correctly?

With symptoms of light fever, headache, body aches and cough, he was tested Dec. 11, 2020, and heard his results — positive — two days later. He has no clue how or where he got it, which is common. Thankfully, he never needed hospitalization. Willie turns 65 in March, so he’s near the danger zone. Dick Fosbury recalled perfecting the flop as a prep while landing in wood chips.

The worst part, he tells me, was the duration of headache and body ache.

Anything he learned from this experience he didn’t know before?

“This is a strange illness,” he told me. “I had completely different symptoms from my wife who got the illness from me three days later. The length of each symptom disappeared in a staggers timeline. Cough then fever then body aches. Headache was the last to end after three weeks (but) was the least disturbing.”

The Zoom event, hosted by the Pasadena Senior Center, attracted more than 50 viewers. The featured trio told of their introduction to track and their most prized moments. Linda spoke of getting encouraging hugs from some lady javelin throwers at her first, nerve-wracking competition. Willie recounted the short version of being inspired to start the rhythmic-clapping routine by some drunk Swedish fans at a track meet. Dick, 73, told of how he evolved his scissors-style jump into the backward layout Flop as a sophomore at Oregon’s Medford High School (and how German and Russian coaches at his Mexico City Games scoffed at his technique ever being as efficient as WR man Valeri Brumel’s). Linda Cohn of the Northridge section of Los Angeles has some nice hardware in background.

Pasadena folks recorded the session and promise to post it sometime soon. I’ll keep my eyes peeled and share the link.

Mostly, I learned about some interesting mind-sets. Dick — elected a county commissioner in Blaine County, Idaho, in 2018 — said we shouldn’t “sweat to death” in training but “sweat to joy.” Willie said “rest is training.” (My retort: “No, rest is life.”) Linda, 68, says she trains exclusively for javelin (where she hold two world age-group records) but still enters six events in some meets, for fun.

Fun was the operative word. The Senior Games ethic is get in the game.

It startled me to learn that Willie had the Rona. But it comforted me that he’d bounced back so well. But that’s what Willie does. An older crowd ate up the 70-minute online talkfest with three track legends.

Be the first to comment on "Olympian, masters star Willie Banks back smiling on Zoom after December bout with COVID-19"