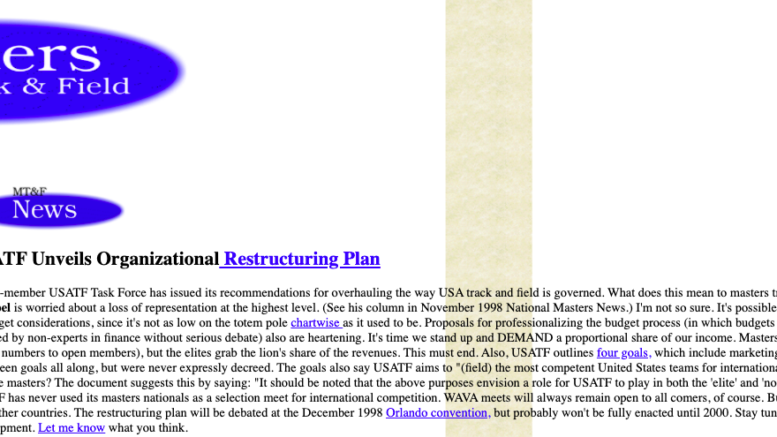 Whenever I hear “OK boomer,” I smile. It’s meant to be a slur on my g-g-g-generation for being digital dunces, among other thing. Well, I just reply: I started my first website before you were born, whippersnapper.

Case in point: My Masters Track & Field Home Page (every site in the late-1990s was a “home page”) went live in February 1996. The exact date? Lost in the mist of time.

The URL migrated over the years, ending up as masterstrack.com and now masterstrack.blog. Between December 2002 and May 2018, I posted nearly every day. Then I got lazy, thanks to my work evolution in semi-retirement and realization that social media had supplanted my mission.

Fact is, I undertook this gig when my day job — as a copy editor for The San Diego Union-Tribune — gave me little outlet to express myself. (I used work breaks to post rants and news about age-group track.) But now that I’m cranking out thousands of words a week for Times of San Diego, I don’t feel as compelled to blog my creativity. Another reason for playing the procrastinator webmaster: I’ve grown closer to my wife in The Plague Times. I’d rather laugh with her while watching TV noodniks than open my laptop. (Last Sunday was our 40th wedding anniversary, celebrated with marinated Costco filet mignons grilled on a portable Weber grill. Delish!)

Ironically, my social media activity has exploded. I’m at @kenstonemedia on Twitter and share trackstuff on Facebook here — commenting on track and current events. Don’t worry about being blocked. I don’t have the energy. (But I’ll never give up my ancient AOL email address: TrackCEO@aol.com.)

Two weeks ago Monday, the lovely and talented Chris Stone and I got our second Pfizer shot, so we’re feeling antsy to explore the world again. We had a taste of that this past week, when we drove six hours to the Phoenix suburb of Peoria to shoot the Padres at spring training. (My wife had an MLB credential and a Sony mirrorless camera. I stayed at motel room.) We’ll do more traveling when we transition to full-time retirement. (Get the sofa ready. I’ll be knocking at YOUR door.)

My journalistic creed of “Tell people stuff they don’t know” applies to this blog as well. I’m always on the lookout for revelations — the story behind the Facebook shares and Twitter memes. So continue to be my masters moles (aka tipsters on geezer track).

My apologies for bonking on regular blogging. But have faith and hope. My Dad is 92 and Mom 90, and their brains are still firing on all cylinders. So at 66, I figure I have at least another 25 years of muckraking left in me. Also I run sprints and hope to resume hurdling and high jumping.

At some point, I’ll be the last tracko standing — and finally achieve my goal of world glory.

Thanks for joining me on this wild and crazy ride.