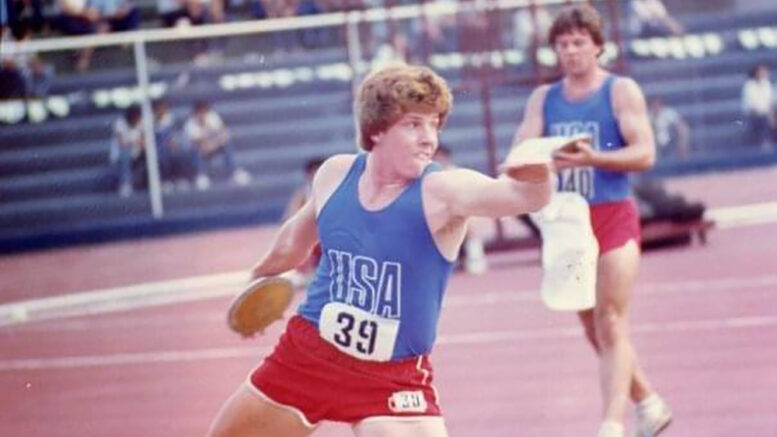 After giving John Garvey some pop yesterday on his World Masters Games Facebook page, I messaged him to learn more details on his group. He’s a lot more interesting than anything I wrote.

He replied that he’s using social media to get folks to appreciate throwing and share information during this pandemic.

“I am creating several throwing oriented Facebook groups to remedy this big disconnect with throwing with focus on athletes, throwing history and throwing facilities,” John said.

He’s a World Masters Games veteran. At 1998 Eugene meet, he won bronze in the discus a few feet behind Dean Crouser in silver. (An Indian took gold.) He and Dean celebrated at Track Town Pizza. Which is where everyone meets in Eugene.

He said his goal is to get people excited about WMG “and that includes me.”

“Technology on FB digital platform will allow athletes in WMG to have better communication, not just top down from WMG. We can also share info on past games,” he said. “Beauty of FB is it’s all free. All athletes, even outside track and field, will hopefully join and the group will become more robust, and provide high value information to athletes.”

John threw for University of Maryland and was 1984 Atlantic Coast Conference and IC4A discus champion. (In 1982, he threw in a USA-Philippines dual meet in Manila.) In 1994, he was U.S. national masters champ. His 2-kilo PR is 194 feet.

He recently recalled on FB that he bumped Michael Carter out of the 1984 NCAA discus final. (Yes, that Michael Carter — the legendary prep shot record-holder and Super Bowl champ who went on win shot silver in the Los Angeles Games. Also father of Michelle, the women’s shot gold medalist at the 2016 Rio Games.)