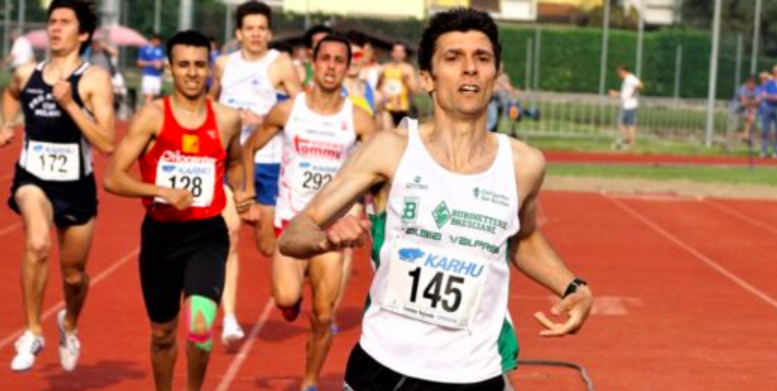 Davide has an amazing range, setting records or near records from 800 to 10,000 meters.

Here’s a recent race by Davide:

Davide also ran a fab 10K a year ago:

The work by DAVIDE RAINERI (05/21/1973, CS San Rocchino) continues Ranieri 353with the rewriting of the Italian middle distance and bottom records of the SM45 category. Last Sunday on the Rodengo track Saiano RAINERI triumphed in the Absolute Lombard Championship of 10,000 meters with a time of 30’23 “88 . We wouldn’t want to be wrong, but this could be his best time ever on the distance.

His is a chrono not far from the European M45 record of 30’16 “8m that dates back to 1966 and belongs to the French Alain MINOUN ; and therefore all in all affordable. Far more distant is the world record M45 established last year by the American Kevin CASTILLE with 29’44 “38.

For the Lombard it is the second record in less than two weeks, after that on the 3,000 meters of 8’27 “50. So let’s soon expect a new venture of this Lombard master phenomenon.

In the afternoon of the Golden Gala Pietro Mennea ample space was dedicated to the competitions of the Master athletes. Davide Raineri (Cs San Rocchino) is the cover-man of the “over 35” program thanks to the world record achieved in the mile trial, for the M45 category, with a time of 4: 13.96, to overcome the previous one after eleven years world record of 4:16.16 by the American Tony Young (May 31, 2008, in Gresham, Oregon).

Solo race in the last two laps for the 46-year-old Lombard, who was blue in the Junior World Championships in ’92, which has resumed racing after a twenty-year stop. The female is Alessandra Lena (Trieste Atletica, SF45) to line up all in the mile (5: 31.81), with Simona Prunea’s second place (5: 32.21, Gs Orecchiella Garfagnana), silver medalist in the 10 km road race W45. Victory for men in the 400 meters for Ivan Mancinelli: the athlete Athena Bastia SM40 leads with 51.21 and beats the SM45 indoor world bronze Massimiliano Poeta (Atl. Fabriano).

But among the protagonists of the race, fourth at the finish line, Alfonso De Feo (Liberatletica Roma), twice gold at the 2018 European Indoor Championships, today author of the best Italian performance SM55 with 53.38. In the women’s track the success for the Italian indoor champion SF40 Veronica Marchesini (Athletic Lab Amelia) with a time of 1:01.02 in the heads-up match with Cristina Sanulli (Atl. Endas Cesena) who won two bronze medals at the European Championships in last year’s hall (200 and 4×200 W45).

The women’s 100 meters go to Serena Caravelli (Atl. Brugnera Friulintagli), sister of the blue Marzia and tricolor of the 60 and 200 indoor SF40: 12.90 (0.0) her chrono, and the SF45 Denise Neumann (Atl Ambrosiana) already world champion in the 200 indoor. Second consecutive victory at the Olimpico for Andrea Benatti (Toscana Atl. Futura, SM45) who sprints stronger than all in the straight in front of the Monte Mario grandstand: 11.40 (-0.1).

Other masters results from Rome:

So why can’t we see masters events at the Diamond League Prefontaine meet?