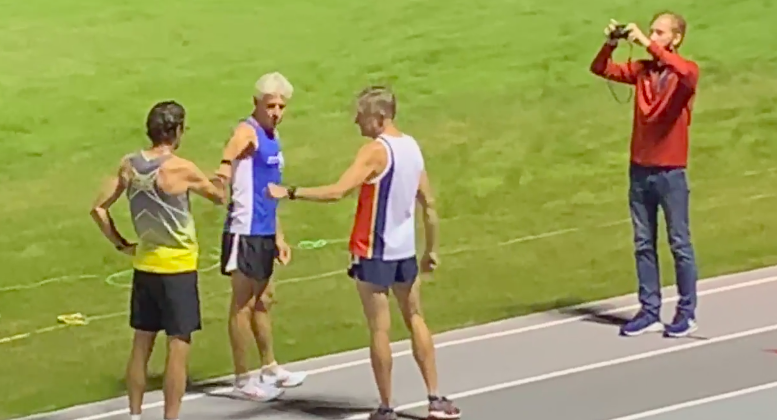 Colorado’s Dan King, 61, ran the mile in 4:53.41 on Saturday — one of the greatest four-lap efforts in masters history. But his paced effort at Ben Lippen School, a Christian prep school in Columbia, South Carolina, was more than 4 seconds off his August mark of 4:49 at a meet in the same city. It barely missed the listed M60 American record of 4:53.01 by Nolan Shaheed in 2012.

Because that earlier event wasn’t USATF sanctioned, his miletone mile isn’t eligible for American and world record ratification (as I telegraphed a few weeks ago).

On Facebook, Dan posted video of his mile and added: “I did my best! I also doubled the 5K about 45 minutes later and bettered the M60 American record for the 3K along the way. So a good night of running!” But he didn’t finish the 5000, dropping out with 600 to go because he felt some stress in his hamstring and didn’t want a big setback. “I think I would have finished in 16:55-16:59,” he said.

In a FB chat Sunday, Dan told me the meet director of the unsanctioned August meet and the sanctioned meet Saturday “was very apologetic and offered to pick up some of my travel costs for the second try. I believe he really tries to do right by the running community.”

I asked about Saturday’s race-under-the-lights at a meet dubbed the Columbia Distance Solution.

The conditions were good. It was probably just under 60 degrees but felt cooler than that with the humidity. I probably encouraged my pacer to take it out a little quick and I think that cost me. My 400s were 70, 72.5, 75, 74. Last time I was super consistent. I also felt more crowd energy the last time. This was a smaller event. And at the end of the day, every race is just different. I knew another 4:49 was a big ask because I felt like I ran a perfect race last time.

I think I screwed up by not finishing [the 5000]. That was totally my fault. My hamstring started to bother me and I decided to back it off. I could have easily just jogged the last 600 but I wasn’t thinking clearly and chose just to stop. I’m kinda new to this record thing.

Dan was led to believe the 4:49 mile meet was USATF-sanctioned, so it wasn’t his fault. But I hope future record-pursuers are extra vigilant on record-setting rules and conditions.

In any case, Dan had an incredible meet Saturday. Hope he finally becomes King of the 4-lap Hill.