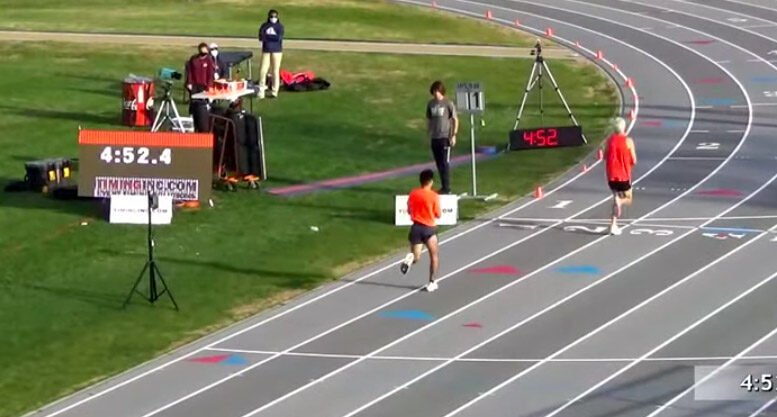 Your Jeopardy answer: “This runner from Boulder, Colorado, swears by a plant-based diet, has a sister who boasts several American distance records and a dad who won the famous Dipsea trail race.”

How about: “This 61-year-old track star ran a mile three times this fall, averaging under the world record for his age group and ending up with ratifiable American records at the mile, 3000 meters and 5000 meters.”

After reporting on his disappointing first two record tries — one under the WR but at an unsanctioned meet — I finally touched base with Dan yesterday via Facebook and learned more about his recent American records.

I also heard him on a podcast with Kyle Case and Lil Barron, where I learned that Dan’s dad, obsessed with running, once had an Olympic distance goal. Dan’s sister, Laura Bruess, also set a bunch of W55 track records in one 2017 race (which I noted on my older blog). The chat begins 5 minutes into the audio. Dan, in blue, starts a track race in running flats. Image via Facebook

Dan considers himself more a 5K runner, but the pandemic shot his “really rich calendar” to hell (including Toronto worlds). So he began focusing on the mile — especially after running amazing times at altitude. First was a 5:10. Three weeks later came a 5:03, which he saw as equivalent to a 4:56 mile at sea level. So he was in record shape. (The listed M60 is 4:51.85 by New Zealand’s Tony McManus in 2012.)

On FB, I asked Dan a few questions, and he graciously shared details of his Dec. 11-12 races in South Carolina, where he finally ran record-eligible marks in the mile and 5,000 (with a 3K record en route. Even cones were set up on the turns).

(The meet took sensible COVID precautions as well: “This is a USATF-sanctioned meet and as such all participants will need to have ONE negative Covid-19 test in the SEVEN days preceding the meet. … In addition, athletes (and coaches/spectators) will have their temperature checked before admission into the facility, and will also be required to complete a symptom survey and liability waiver.”)

My chat with Mile King Dan:

Masterstrack.blog: How well did you execute your race plan at the Five and Dime meet?

I did a 1K time trial about 10 days out and it was slow – around 3:15, which was 15 seconds slower then where I’d hoped to be. But I had a good 300 meter session a week out and that helped me gain some confidence. But I thought it was going to be a challenge to get the mile record again, and the 5K seemed a little intimidating too.

Yeah, it worked out. I don’t give myself enough credit for how mentally strong I can be when I race.

I had a pacer for the mile, a great young man named Adam Cortez. He was trying for 30 10k on Saturday, which means running 72 400s. So pacing me through a mile at 72s was a good pre-race workout. I was on WR pace still with 200 to go, but I was a little too spent to bring it home. I could feel my form breaking down a bit, and sort of helpless to do anything about it. I ran hard and actually was pretty happy with the AR time. I didn’t know if that was in the cards or not.

On Saturday, [meet director] Dave [Milner] found another young pacer to help me out, a guy named Alex. He was also excellent. I asked him to help me run 80-second 400s at least through 3K. After the 3K, I decided I would try to keep running that pace as long as possible. I was right on my mark through 3K, I accelerated just a tad to go sub-10. I stayed on pace until three laps to go, then I slowed a bit to 85s. I felt my hamstring twinge on the penultimate lap – you can see me grab it in the video – but I powered through and it didn’t go. I managed a sub-80 last 400 to get the 5K record.

Any competitions in winter or spring? You need a rest.

I’m going to take a break through the winter, no anaerobic training until March at the earliest and no racing.

Good 4U. You had a miraculous year.

I’m also experimenting with the Easy Interval training method this winter. I think it will set me up for a fantastic 2021 once I get back into it fully.

In the podcast, Dan said he would take another shot at the mile best in 2021.

By this time a year from now, I hope Jeopardy features an answer: “This 62-year-old runner claimed world age-group records at the mile, 3000 and 5000 and never ate nonorganic grains.”

Carolinas brace for Hurricane Florence: ‘Storm of a lifetime’ may wash out USATF events