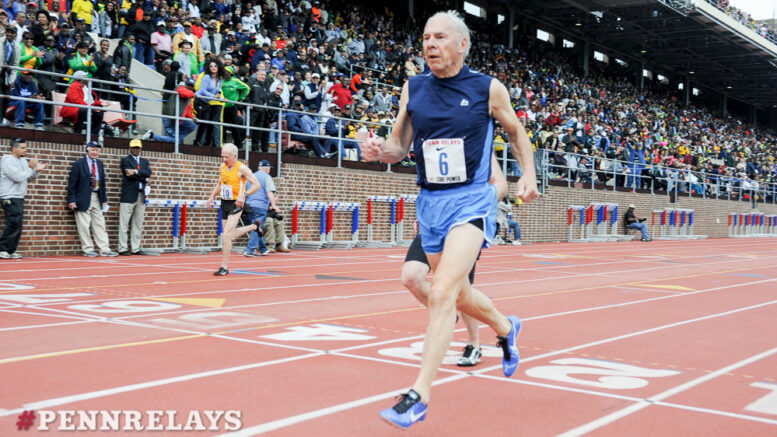 Dick Camp excelled at the Penn Relays, where he took part in the popular old-guys 100-meter dash.

“Now it can be told,” I blogged in March 2007. “The recent world indoor record 4×2 relay team, made up of four 70-year-olds, benefited from PED. No, not drugs — performance-enchancing deity. The Rev. Dick Camp, No. 3 leg on the 1:54.05 team, writes: ‘Two things stand out in my memory: 1) Rich (Rizzo) asked me to lead the team in a prayer before the race. We asked that God would be honored in our performance; 2) as I completed my leg, I gave an extra lunge to be sure Bob Lida got the baton in our handoff, and I fell hard. The strawberries on my hip, shoulder, and knee are pleasant reminders of that extra effort.'”

Now, sadly but with relief, Dick has joined Bob in a better place.

His daughter Kathy wrote me Monday with the mournful news: Dick died on the Ides of September, less than a week after turning 84, of complications from Parkinson’s Disease. I quoted him about that diagnosis in May 2012: “I am not taking medications for PD. My wife is filling me with brain food like kale, cabbage, etc., and good supplements. I also believe that wind sprints and sprinting produce dopamine in the brain, giving me reason to train more vociferously for health reasons.”

I met Dick several times, always impressed by his friendly encouragement. He was a fierce competitor who took no prisoners on the track. One of his mottos: “Run to win.” I loved taking his picture motoring toward the virtual tape.

West Point, NY. — The Reverend Dr. Richard P. Camp, Jr., longest serving Chaplain at the United States Military Academy from 1973 – 1996, died at his Sarasota home from complications due to Parkinson’s Disease on Tuesday September 15. He was 84.

Chaplain Camp was born September 5, 1936 in Fair Lawn, New Jersey to Richard Camp Sr., also a Pastor, and Martha Spruit Camp. The eldest of 5 children, Chaplain Camp excelled at leadership and sports. He became an All-American in football and dominated in track and field.

He followed his father to Wheaton College in Illinois where he was captain of the football team, ran track, wrestled, and was Crusader of the Year in 1958. Recruited by professional football teams across the country including the legendary George Halas and drafted by the Chicago Bears,

Chaplain Camp chose to play semi-pro football for the Tri-City Chargers where his teammates nicknamed him the “flying parson” as one of the fastest fullbacks in the game. After completing his graduate degree at Gordon Divinity School in Hamilton, MA, he pastored several churches including East Rochester Baptist in New Hampshire and South Shore Baptist in Hingham, MA. He was the Dean of Students at Gordon-Conwell Theological Seminary, moving to West Point where he embarked on a 23 year career as Chaplain at the United States Military Academy. Dick had a world-class fan in daughter Kathy Camp.

His passion was teaching cadets to build “spiritual muscle” in preparation for the Army and for the challenges of life. He would hike Bull Hill as cadets trudged up the mountain in the last week of their summer training, company after company, year after year, encouraging them with song and scripture.

From Bull Hill to Trophy Point to the majestic Cadet Chapel, he reminded cadets to seek God. “I lift my eyes to the hills,” he quoted from Psalm 121. “Where does my help come from? My help comes from the Lord – Maker of heaven and earth.” A consummate relationship builder, Chaplain Camp pointed thousands of cadets to God, guiding them through some of the most challenging times in their developing lives.

He led the Academy through the arrival of the first class of women in 1976, the cheating scandal of the class 1977, led the Iran hostages reunion in 1980, championed the building of the Jewish Chapel in 1984, provided the invocation for several Heisman Trophy Award presentations, came alongside General Officers, elected officials, world leaders and scared parents dropping off their sons and daughters on the first day of Beast Barracks.

Chaplain Camp retired from West Point in 1996 and became the Executive Director of A Christian Ministry in the National Parks. A lifelong athlete, Chaplain Camp ran in the Masters Track and Field circuit, setting the world record in the 4×200 meter dash at the age of 70.

Chaplain Camp’s anchor biblical verse comes from 1 Corinthians 9:24-26 “You’ve all been to the stadium and seen the athletes race. Everyone runs; one wins. Run to win. All good athletes train hard. They do it for a gold medal that tarnishes and fades. You’re after one that’s gold eternally.”

A memorial service will be held in the Spring of 2021 at West Point. Chaplain Camp said, “Memorials should do more than cause us to look back. They ought to serve as a time of motivation, a time of reflection, a recommitment to the highest purposes in life. I suggest that significance begins with being in touch with the Creator of the universe, a relationship with the living God. What does the Lord require of you? Do justice, love mercy and walk humbly with your God. My plea to you is to live significantly. The world needs leaders who will stand boldly and courageously for justice, truth and righteousness. Who knows – your greatest contribution may still be ahead!”

We also learn: “For more information visit www.chaplaincamp.org. Donations can be made to Chaplain Camp Christian Charities, supporting West Point Athletic Ministry at www.ChaplainCamp.org/donate or via the West Point Association of Graduates at 845.446.1657.”

Yesterday was my father’s 84th birthday. Today is my parents 62nd wedding anniversary.

As my father prepares to cross the finish line, there are three things my father taught me about living a good life. He has lived them.

1. Give grace. “Grace is not a blue eyed blonde… ” dad once said in a sermon. Grace is love and forgiveness that comes from God. It is the greatest gift He gives to us and the greatest gift we can give to each other. Grace heals all.

3. Have hope. Never lose sight of it. My father ended every church service with Romans 15:13 which says: “May the God of hope fill you with joy and peace in your faith, that by the power of the Holy Spirit, your whole life and outlook may be radiant with hope.”

For my father, for my parents, for our family nucleus as we know it, this is the last Hoorah.

For you, for me, for our relationship, this is the beginning. Every day is a new day – fresh – with no mistakes in it.

Wherever you are in your race, no matter what you’re facing, the sun will rise in the morning. No matter what is happening in the world, in your life, in your faith, God is good, all the time.

A friend sent me a wonderful blog post by Kathy Camp, daughter of former world-class M70 sprinter Dick Camp, now about 80 and battling Parkinson’s. She wrote that her dad ran masters in his 60s and 70s because of Dave Sime. “My father’s heart hurts today,” she wrote the day Dave died. “Life is a little bit lonelier – a little bit sadder when you lose your person. David and Dad were best friends for over 70 years. Best men in each other’s weddings, the first phone calls made at births of children, grandchildren, great-grandchildren. Their weekly phone calls were the most animated I’d seen my father. Talking about old friends, old plays on the field, old memories that bound them together for 50, 60, 70 years. Dad prayed that David would know Jesus. That he’d trust Him. That he’d offer his life to Him. I hope he did. I hope they will see each other again.”

Add Dave Sime to that relay in the sky.