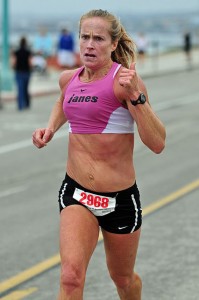 Kirsten is a road warrior, too. Photo via thejanes.net

A couple days after Kirsten O’Hara-Leetch set a W50 American record in the track 10K (the only one that counts), I posted the news as part of a Mt. SAC Relays roundup. Per custom, I shot a note to USATF communications to let them know. Sometimes my suggestions get Athlete of the Week recognition. But days passed, and USATF didn’t announce a winner. Finally, today (almost a week after AoWs are typically posted), I wrote my Indy contact: Did you pick an AoW? The answer: “Yes, we did! Posting got lost with all the Penn/Drake business but it is up now.” My source gave the link, which showed a reasonable pick: USC freshman Twanisha Terry, who won the invite 100 in 10.99. Thankfully, Kirsten’s 10K rates an honorable mention. So that’s a happy result. Later today, my heart sank to learn that Mt. SAC was dropped as host of the 2020 Olympic Trials. (Bidding is reopened.) I quickly posted a story to Times of San Diego, and updated with quotes from the lady behind the lawsuit that led to the crash-and-burn. (She says USATF chose Mt. SAC fully aware of her litigation and potential for stadium delays.) In any case, I’m pumping for a Trials at UC San Diego. (So I can sleep in my own bed.) Where would YOU like the Trials held — with its usual masters exhibitions?