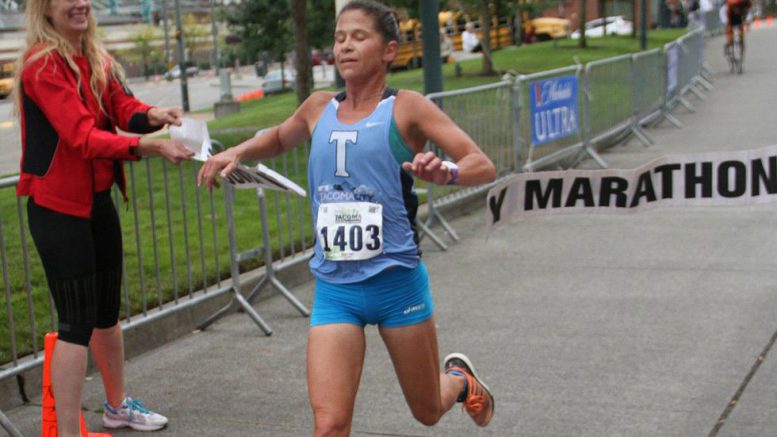 Kate Landau, shown at another race, kicked butt with the kiddies in the Portland 10K.

Kate’s historic run comes after a rollercoaster career that saw her fighting an eating disorder — anorexia — and other life issues, including a slew of stress fractures.

Joanna Harper, who was a lap counter in Kate’s race (and others), reports: “Five women put up AGs over 90 percent in the mile with Lesley Hinz scoring 98.6. Three more women turned that trick in the 3000 meter race with Carmen Troncosso getting 96.1 percent Sonja Friend Uhl won the mile in 5:07 and Tania Fischer won the 3000 meters in 10:48.”

But back to Kate, who was profiled by Runner’s World in 2016:

With a history of running addiction and anorexia — her weight plummeted to 79 pounds before her senior year of high school — Landau did almost no running after college and never imagined running again as she sunk deeper while confronting one battle after another.

But in the fall of 2013, after moving to Tacoma, Washington, Landau began to experience a rebirth. “As soon as we moved,” Landau says, “I began to feel totally different.”

Landau’s path to renewal took 14 years. After graduating from Georgetown in 1999, she attended Samuel Merritt University in Oakland, California, where, in 2001, she received a degree as a physician’s assistant. Still in the throes of her illness, and living in Berkeley, Landau got a P.A. position with a practice in Oakland, specializing in vascular surgery.

Landau attempted to run every so often, but within days she would be forced to stop for lack of energy or injury. As an alternative, Landau took up bicycling. But, she says, she compulsively did too much. At the same time, she couldn’t free herself from anorexia’s stranglehold.

One day in 2011, Landau, in despair, put herself in the care of a physician and psychologist, both specialists in eating disorders, as well as a nutritionist. They worked as a team to liberate Landau from the disease.

It’s as if all along her running soul remained pure and her early achievements—3rd in the 1991 Foot Locker high school cross-country nationals, 2nd in the 1996 NCAA 10,000—were a touchstone. Approaching 40, Landau could again summon the talent that, despite her eating disorder, allowed her to run 15:53 for 5K and 33:08 for 10K in college.

So proud of you, Kate. Welcome back!