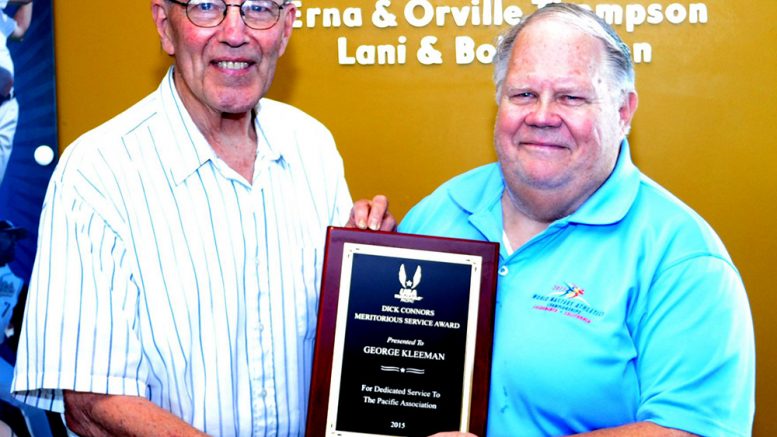 George (right) won too many awards to mention. Photo via pausatf.org

George Kleeman was a superstar in his field — officiating track meets on the national and international stage. When he died April 22 at 77, a week after a major heart attack, he deserved his kudos. Services were Monday in Pleasant Hill, California. Among his dozens of major meets — USATF masters national in 1993, 1995 and 1997 and world masters meets in 1985, 1989, 1999, 2001, 2003, 2005, 2007 and 2011. “Many recognize Kleeman’s numerous contributions to national and association events and committees over the past three decades, but he was also an accomplished distance runner in the 1960s-70s having run more than 20 marathons and three Ultras. He won the USA-AAU 50 Mile Championships in 1979, earning a spot on Team USATF to compete at the 1979 London-to-Brighton Ultra Run,” USATF reported. The USATF Official newsletter offered other details. (See below.) I didn’t know him well, but I had a memorable visit with him at the 2012 USATF annual meeting in Anaheim, where we snacked and talked javelin history. (He expressed an interest in Bud and Dick Held’s memoir on the modern javelin, and I later emailed it to him. Improved his already expert knowledge.)

It is with great sadness that we pass on the news of the death of George Kleeman. He passed away on Sunday, April 22 – one week after suffering a major heart attack. George, 78, officiated Track & Field since 1975 and was one of the most influential leaders in officiating nationally and internationally. Some of George’s contributions to our sport are listed below. Above those things, however, George was a mentor to many of us. He always had time to talk, teach, mentor, and encourage officials. The quality of officiating in the US today is a result, to a large degree, of his work and influence. There are many documents in the N.O.C. Best Practices Library that were authored by George and give guidance to officials across the country. He was an IAAF Instructor and taught IAAF ATO’s and ITO’s throughout the NACAC area, having served as an IAAF ITO himself. He held offices within the National Officials Committee and served on or chaired several committees through the years. He was a leader in the Gulf, West Virginia, and Pacific Associations as he lived and worked in those areas and each is richer because of George’s efforts.

Services will be held on Monday, April 30, at 10:00am at Christ the King Catholic Church in Pleasant Hill, CA. Memorial Gathering and remembrance donation details are pending. All updates will be posted on www.pausatf.org “recent news” section. There is a more complete biography here.

Be the first to comment on "George Kleeman dies at 77; USATF technical official at many WMA meets"