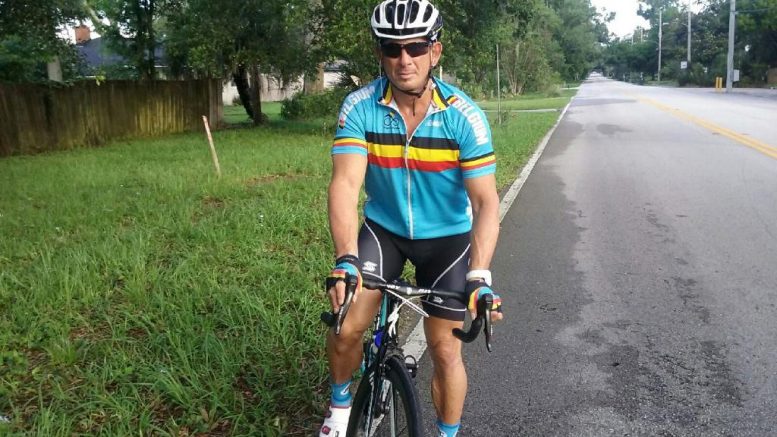 When USADA reps showed up at the Florida home of 59-year-old road cyclist Scott Gross at 8:32 p.m. May 3, he refused a drug test. So he drew an automatic 4-year suspension. He didn’t appeal. After posting about Scott’s case a couple weeks ago, I found him through his cycling shop, Open Road Bicycles. Scott Gross copy of USADA form he signed May 3 in home visit. (PDF)

He called me, and we chatted for about a half-hour.

He told me he refused testing, which he assumed would include drawing blood, because he met the USADA pair in his garage and didn’t think it was a suitable place. He also wasn’t sure the reps were up for the job, he told me.

Scott sent me a copy of his refusal form, which included his signature. In comments, USADA Doping Control Officer Laura Hahn wrote: “Athlete spoke with USADA rep and determined not to take test due to feeling he would test positive for vitamins he’s taking with DHEA. He doesn’t want to waste our time.”

Scott also told me he was taking DHEA, an anabolic substance, because he was nearing age 60 and was feeling his mortality. (DHEA often is touted for anti-aging and better-sex properties.)

He knows it’s banned but doesn’t care. He says he competes for fun — and isn’t anywhere near championship caliber. He doesn’t deprive anyone of prize money, he says.

Who fingered him via the Play Clean Tip line (or email)? Scott isn’t sure, but he suspects it’s an old girlfriend. He says USADA had an old address on record but visited his new address — and his ex knew where he was. (USADA paid its own way for the visit.)

He calls himself a passionate cyclist who will continue to ride with his friends. Scott says USADA advised him he could ride in nonsanctioned events (which Lance Armstrong did after his bust).

Scott’s case isn’t the last for a masters cyclist.

On June 1, in fact, USADA announced a two-year sanction for an M50 cyclist in Oklahoma — Buster Brown of Bixby.

From the news release:

Brown, 53, tested positive for the presence of an anabolic agent and/or its metabolites as the result of an out-of-competition urine sample he provided on October 11, 2016. Brown was target tested based on credible information USADA received through the PlayClean Tip Center. His urine sample was analyzed using a specialized test that differentiates between anabolic-androgenic steroids naturally produced by the body and prohibited anabolic agents of external origin. The use of anabolic agents is prohibited at all times under the USADA Protocol for Olympic and Paralympic Movement Testing, the United States Olympic Committee National Anti-Doping Policies, and the International Cycling Union Anti-Doping Rules, all of which have adopted the World Anti-Doping Code and the WADA Prohibited List.

After a thorough review of the case, including the examination of medical records provided by the athlete, USADA determined that Brown’s positive test was caused by a prescribed medication containing testosterone, which he was using in a therapeutic dose under the care of a physician. Although the substance was taken at the direction of a physician, the USADA Therapeutic Use Exemption (TUE) Policy requires athletes to obtain a TUE before using a prohibited substance.

Brown’s two-year period of ineligibility began on November 29, 2016, the date his provisional suspension was imposed. In addition, Brown has been disqualified from all competitive results obtained on and subsequent to August 1, 2015, the approximate first date he began using testosterone, including forfeiture of any medals, points and prizes.

And on we roll.