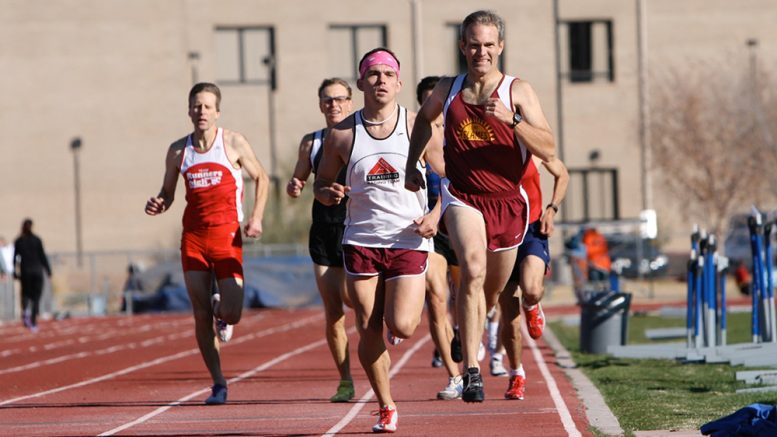 Athletic performance breakthroughs are rare. For masters athletes, they may be even less common, since the athlete has already tried many approaches to improve their performance, and because time is constantly eroding what is possible.

I seem to be experiencing one of these rare breakthroughs. It’s exciting, but I’m still not sure it’s going to last, and that makes me nervous.

I am sharing my story in the hopes that some of you will share your own, and give me some perspective and insight into what may be happening.

Since I began running track at age 44, I have been consistently good but not great. I met the All-American standard in the 800 meters in my second year of competition, and naturally looked to improve from there.

Surely with some additional experience and effort, I thought, I would climb in the world rankings. But in spite of a serious approach and a lot of work, that never happened. Every year I met the All-American standard for the 800, but never cracked the world top 25.

Then, beginning in 2015, I had a series of injuries, including plantar fasciitis, a sportsman’s hernia, hamstring pulls, a broken toe and finally two meniscus tears. My record from mastersrankings.com shows two mediocre 800 race times from 2015, and then nothing, until this year.

I tore my left meniscus (the lining of the knee joint) in early 2016, and didn’t realize what I’d done until later that year. All I knew is that it hurt to run more than a mile or two, and I couldn’t train seriously. I had surgery in November, and then, while rehabbing my left knee, tore my right meniscus in early 2017.

I was finally able to resume training in the summer of 2017 and, needless to say, I was really slow. I wasn’t sure I would ever be able to return to competitive track.

Due to my knee injury, I wasn’t able to run more than a few miles without my knees swelling and aching, but sprinting didn’t have the same effect. I was able to run all out without bothering my knees, and that’s what I did. It was a lot more fun to train as a sprinter instead of an 800 meter runner, and I made rapid progress.

The question is: WHY am I faster now? The answer is: I don’t know. It could be because I always had more potential in these shorter races, but that my focus on the 800 meters kept me from training to my potential. It could also be that my three-year, injury-enforced break from competition has given me “fresh legs.”

Or that my unique genetics are causing me to lose speed more slowly than other people on the rankings list.

As I mentioned, I’m nervous. I’m months away from age 60, and I’m worried that I’m going to be injured, or fall ill before I get some official marks in the record.

Recently I’ve had a period of low energy that I believe was caused by dehydration, and then some heart flutters that concern me. I hope that I can continue to perform well, and even improve, long enough to enjoy the fruits of this breakthrough.

Have any of you experienced something similar? What was it like, and did the improvement last? Do you have any ideas about what could be going on and how to keep it going?

Welcome to Guest Essay, our latest feature. If you’d like to submit your own and reach thousands of people, write me at TrackCEO@aol.com and include a photo of yourself (preferably in competition). All essays are unpaid and subject to light editing.

8 Comments on "Douglas Thompson: Why am I having a sprints breakthrough after 800 focus?"