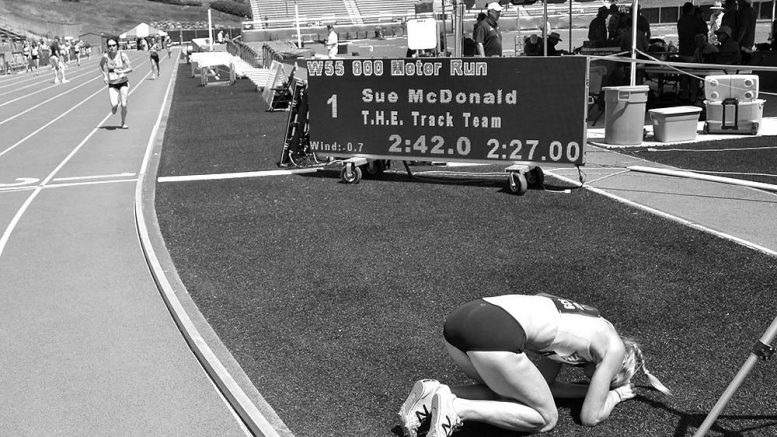 Sue McDonald recovers after setting a W55 American record in the 800. Runner-up Lynn Cooke was 10 seconds back.

Sue McDonald of Santa Barbara lowered her own W55 AR in the 800 by clocking 2:27.00 — a few ticks ahead of her recent 2:28.88. Three-time race walk Olympian Michelle Rohl returned to her old college distance, the 800, but won W50 in scary fashion.

About 10 yards from the finish, suffering in the mid-90s heat, she staggered and weaved, and needed help getting to a nearby medical tent. There she quickly recovered after getting bags of ice for her neck and stomach.

I spent the day taking pictures — and drinking at least five bottles of water.

One interesting sidelight was the presence, in the M35 800, of Vitaly Stepanov, who with his wife Yuliana blew the whistle on the Russian doping system — leading to that nation’s Rio Olympic ban.

Meanwhile, check out the Spokesman-Review’s great story about Sabra Harvey’s continuing Hurricane Harvey ordeal in Texas. Here’s the USATF release for Day 1 — and my best shots from Thursday.

You can find about 80 high-resolution color images here and some more black-and-whites here. Why? Just cuz they’re cool. At this meet, we need cool. Sue McDonald leads recent W55 mile record-setter Susan “Lynn” Cooke in the 800 where she lowered her own American record. Three-time Olympic race walker Michelle Rohl, suffered from the heat at the end of her 800, but still won the W50 age group. McDuffrie Allen of San Diego is congratulated by Kevin Paulk of Portland, Oregon, after the M55 800. A banner urging stadium-goers to report misconduct at football games is behind former Russian whistle-blower (and world-class 800 runner) Yuliya Stepanova as she congratulates her husband, Vitaly. Dr. Richard Watson of Yuma guts out the 1500 – the last event of his M65 pentathlon. Here’s the USATF release for Thursday: