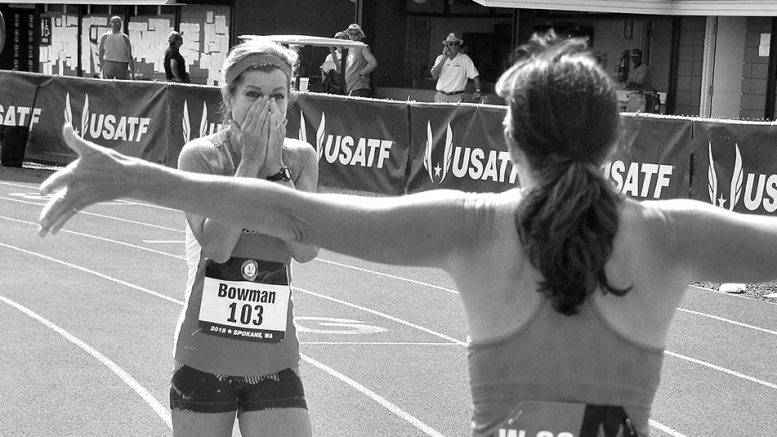 If track meets are three-ring circuses, what are masters nationals? A ballet buffet? After four sizzling days in The Inferno (what they call the Eastern Washington University football stadium), I’m overheated with memories. Some are personal — like getting season bests in the high jump and 200. Others were communal — as when 93-year-old George Roudebush helped an M80 team become the oldest to record a shuttle hurdle time. Witnesses to his gingerly slow-mo step-over of the 27-inch hurdles will never forget it.

Thankfully, on Day 2, I had finished my events and focused my Nikons on that event. The W40 team of Rachel Guest, Danelle Readinger, Lisa Edwards and Kimberly Touya cranked out a 52.18 American record in the 4×80 (despite live results site calling them a DNS.) And Danelle literally kicked up her heels in giddy celebration.

Then there was Iowa’s Kay Glynn making height after height in the W65 pole vault, every time a surprise to herself. She wore flag-styled cutoff shorts and did a handstand on the runway. Incredible.

Finally, a touching moment at the 50th anniversary of the first masters nationals: Amanda Scotti congratulating her conqueror Becky Bowman in the W60 100. Becky looked stunned that she won. USATF’s Ashley Mitchell, with help from the finish-line tent, summarized the records of the day in her nightly website recap. So you can review them here. And USATF marketing intern Alexia Beecher did nice Q&A “spotlights” with vaulter Gary Hunter, sprinter Charles Allie and thrower Neni Lewis.

Before and after my events, I took about 6,000 pictures. I uploaded faves to my Google Drive, which can be downloaded free in high-resolution glory. (Look for the three vertical dots at upper right for download option.)

M100 Orville Rogers was rightly a media focus, but I couldn’t look away from the likes of Rachel Guest (incredible form in the jumps, hurdles and sprints) and Derek Pye (winning the M50 100 while clutching his injured hammie).

See Day 1 shots here. (And some in black-and-white.)

(No charge, but I gratefully accept love offerings.) Danelle Readinger does her happy dance after AR Signboard was prop for many record-setters M70 Charles Allie won every sprint, but paid the price Rex Harvey and Marilyn Mitchell pitch in to haul hurdles Kay Glynn was head under heels before a late-event jump Kay Glynn is our Christmas elf, but will never put her athletic career on the shelf