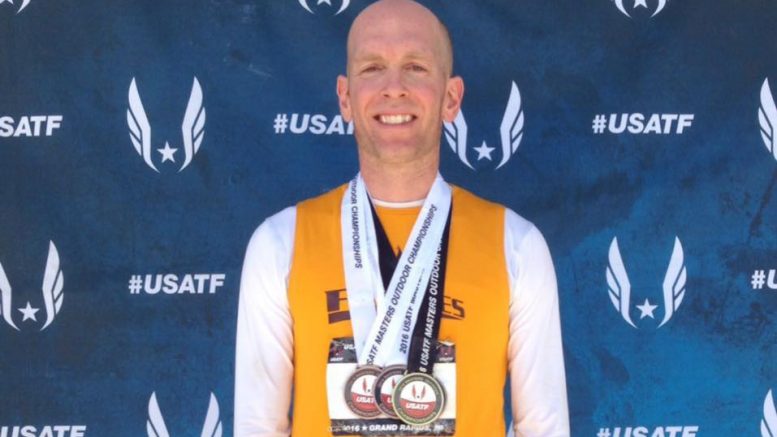 Josh Robbins showed off national meet hardware. In Spokane, he took silvers in in the M40 100 and pentathlon.

M40 national-sprinter Josh Robbins is so geeked out on masters track he’s started posting videos promoting our niche on Facebook and YouTube. He’s based in Arizona, but his work is an example for USATF associations and clubs nationwide.

I was so taken by his professionalism, I shot him a note. He graciously replied to my quickie Q&A.

Masterstrack.blog: Where in Arizona do you live? What’s your line of work?

Tell me about your track career — high school, college, etc.

In 2013, after a 19-year hiatus, I joined the Arizona Flames Track Club. My goals were modest. I wanted to survive the first week of practice and break 25 seconds in the 200 dash. I had no idea USATF Masters TF existed in any capacity. I remained active throughout the years including 2005-2009 biking everywhere (no car, living in California).

In February 2016, my teammate Jayson Vazquez basically dared me to compete at Indoor Nationals (Pentathlon) in Albuquerque. I never tried any of these events (60m hurdles/LJ/Shot Put/High Jump/1000m) leaving me with only 30 days to prepare. Since then, I have fallen in love with every event and have a lifetime goal of competing in them all.

I graduated in 1998 from SUNY New Paltz with a BA in Video Production. From 1999-2012, I worked in many different media outlets including TV news, City TV and private video production companies.

What led to your making these masters track promo videos?

First of all, this is not about me. I want to give back to this amazing sport. In my opinion, Arizona Masters Track and Field has noticeably declined in participation during my six years on the “circuit.” There are amazing athletes in the Grand Canyon State and I want to share their stories. I have many promo shoots scheduled with newcomers, former Olympic hopefuls, and state and national record holders.

Who have you shot so far? Who else do you plan to shoot?

Thanks to Clint “Flash” Santoro for helping me on these shoots. Our first promo video featured Megan Goudshaal, a brand new member of the masters TF community. She was a natural on camera sharing her background with no prior T&F experience. She is a perfect example of someone interested in competing (100m dash) and trying to improve despite an atypical sprinter’s physique.

Douglas Thompson (age 60) discussed his quest to break the 60-second barrier in the 400 dash during the 2019 season. According to mastersrankings.com, only 16 males athletes worldwide (only two USA) eclipsed this mark. (See video here.)

How are you helping Sandy Triolo with masters track marketing and PR?

Sandy reached out to me about sharing the videos on the USATF Masters media platforms and joining her subcommittee. I would be more than happy to share/help ideas when called upon.

How much time have you put into this project?

I use my daughter’s naptime to brainstorm ideas and write content. For six years, I showed up to meets expecting others to do the work. It is my time to help give back to the sport. Before Megan’s video, I had not created a video in almost seven years (dusted off an old skill).

What are your own track plans this coming year — indoor or outdoor nationals, WMA regionals?

After outdoor nationals in Cheney, Washington, I came home motivated to increase my endurance. At the end of the Pent 1500, it was apparent that my strength was lacking. During the past four months, I have increased my running to four days per week (3-3.5 miles). On Tuesday nights, my friend Roland has been coaching me on hurdles at Queen Creek HS.

I plan on competing at indoor/outdoor Nationals. Pent/LJ/200m/relays in North Carolina most likely.

Anything else readers should know about your video project or yourself?

Hopefully, these videos will inspire at least one new person to join USATF Masters Track and Field (specifically AZ). Thanks very much for showing interest in this endeavor.