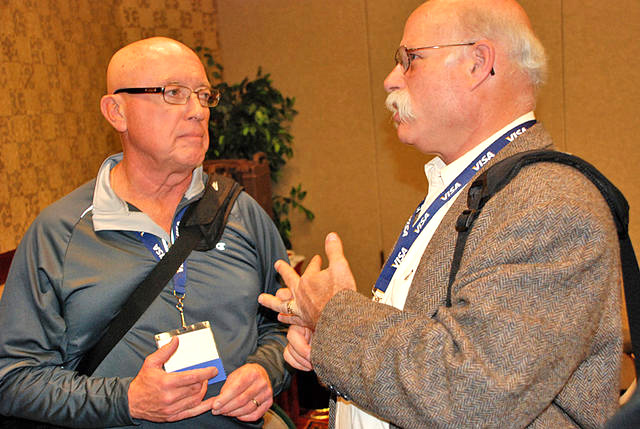 If M100 Orville Rogers was the media star of Spokane, look for M90 William Platts to be the recordman at Seattle this weekend. He’s entered in the throws pentathlon at the USATF National Masters Throws Championships (strangely absent from the USATF nationals calendar.) His fan Suzy Hess Wojcik, a W75 Eugene thrower and former National Masters News publisher, called Bill: “Number 1 in the world in 5 events and 2 World ranking in another event.” In any case, USATF master mediafolks have issued a nice preview of the meet at West Seattle Stadium directed by George Mathews, a former masters national chair:

(Seattle, WA) — Seattle will host 71 of the world and country’s top “throwers” from 30 to 90 at the USA Track & Field National Masters Throws Championship Saturday-Sunday, August 4-5. The event will be at West Seattle Stadium, 4432 35th Avenue, SW, 8AM to 6PM Saturday and 8-5 Sunday. World champions, world and national record holders will compete national age group championships. World and American records are likely.

The event spotlights the mission of masters track and field: lifetime fitness, health, and quality of life through training and competition.

Oldest competitor is William Platts, M90, Boise ID in the Throws Pentathlon, a national champion likely to set records in the 90-94 age group.

Many Seattle area athletes are competing. Media are welcome for photos and interviews.

Competitions will be in three blocks of events: the Throws Pentathlon, with the shot put, discus, hammer, javelin, and weight throw; the Superweight; and the Ultraweight Pentathlon. Men and women use implements varying weight by ten-year age. It is a very exciting competition.

Other potential stars include:

Happy new year from the WMA