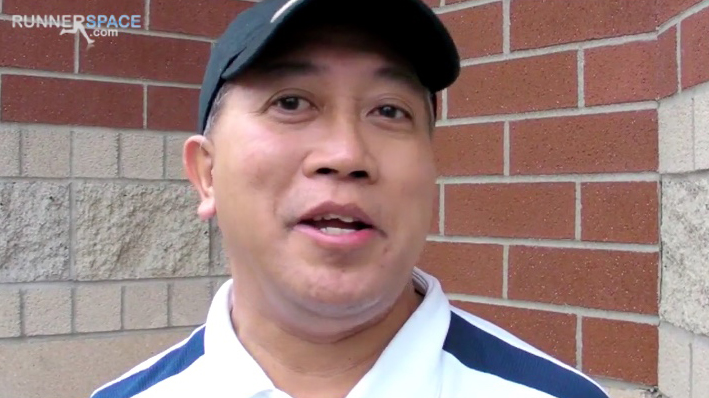 Paul Merca is humble about his masters knowledge but is a world-class expert on elite level track and field.

M55 track writer Paul Merca of Seattle is one gracious guy. He let me win the inaugural TAFWA blogging award in 2009 before swooping in for the honor in 2010 via his site. Now he’s onto another task – announcing Spokane masters nationals (actually Cheney, but whatever). Over the past few days, we’ve chatted about the challenge.

He’s well aware he’s filling the superstar shoes of Peter Taylor (rehabbing from a near-stroke experience). But Paul aims to do justice to our niche, cramming daily with the help of Pete, spreadsheets of entries and reviewing this blog.

On Facebook this week, Paul asked for resource sites and said: “I’m all ears. I’ve only got nine days to learn about masters track and field!” He’ll be fine. He’s already an accomplished announcer from doing University of Washington meets.

He’s traveled the world as a track publicist and photographer as well. Although he’s covered a slew of IAAF world meets, this appears to be his virgin masters nationals. He’ll lack the encyclopedic memory of Pete, but he’ll still excel at introducing and calling races. He’ll also make an effort to highlight field events.

Here’s how Paul called the NCAA men’s 800 record in April:

SPOKANE, Wash., July 17, 2018 /PRNewswire-USNewswire/ — From Thursday to Sunday, July 26-29, The USA Track & Field Masters Outdoor Championships in Spokane (Cheney), WA at Eastern Washington University’s Roos Field, will showcase over 900 of America and the world’s best track and field athletes in over 2400 events.

Rex Harvey, USA Masters Track & Field Chair, said: “Many of the athletes here in Spokane are doing their final tuneup before going to Malaga, Spain September 4-16 to compete in the World Masters Championships. I couldn’t be more proud of our US Team; Athletes, Officials, and Administrators. We are working together to become the world’s number one masters team.”

All athletes are subject to drug testing at the meet.

The meet runs all four days, 8AM to late afternoon. Spectators are free. Media welcome.

Visit USATF website for information at www.usatf.org, www.usatfmasters.org, https://twitter.com/USAMastersTrack
Thanks to: Mary Trotto, Rachel Guest, and Jay Wind for helping Sandy, Bob, and MTF in compiling this material.