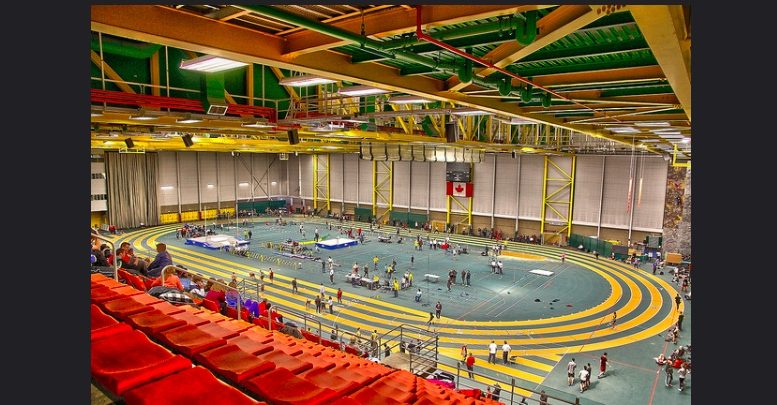 The 200-meter track at Edmonton's Butterdome beckons. The best thing since sliced bread.

I’m getting excited for 2021, and not just because I might burn my mortgage that year. Indoor worlds comes to Edmonton that year (as noted in Malaga coverage). A report last month in the local paper has a great quote: “It’s a very attractive event from the city’s perspective because it’s not a group of athletes coming on a government-funded program, who stick around their hotel and eat Ramen noodles. They’re out spending money, they’ve got disposable income.” So says James Rosnau, executive director of Athletics Alberta.

I’m also eager to compete in the coolest named arena — the Butterdome. (From the air, it looks like sticks of butter.) The real name is Universiade Pavilion at the University of Alberta.

But the Butterdome may be a secondary venue.

Says the story: “Athletics Alberta will soon announce plans to begin building a massive new indoor facility in the city’s southwest end, near Anthony Henday Drive. In the works since 2016, it’s a 70,000-square foot, multi-use building that will house a 200-metre track with a full, 100-metre straightaway, a throwing cage, weightlifting area, office space and medical treatment centre.”

I hope local media expand their horizons, however.

They said: “Former Olympians will be among the competitors, who must be at least 35 years old. Some participants will be as old as 90.” (First off, no such thing as former Olympian. Once you’re in the Games, you’re an Olympian for life. Second, expect lots of tracks older than 90.)

Anyhoo, Alberta is only 1,500 miles from San Diego. So no excuse for my not competing in my first indoor worlds. (Watch out, M65 hurdlers. Seriously, I might clip your barrier and take you out.)