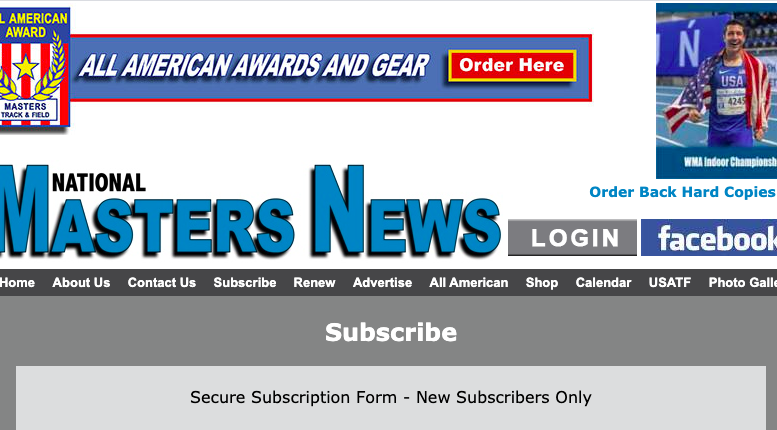 Get National Masters News at $39 to keep in the loop on official USATF masters biz and see great feature content.

Last month, several athletes including Florida-based M65 thrower Guy Dirkin, launched an effort to replace 2020 Toronto worlds with something they call the 2020 Worldwide Virtual Masters Challenge. It’s being run out of John Seto’s mastersrankings.com site, charging 2 Euros ($2.35) per event. If I enter the M65 short hurdles now, I’m in the running for a medal. If I enter the high jump, I could win gold. I’ll pass. (See Status of Entries.)

But WMA Prez Margit Jungmann of Germany has given the event her seal of approval. She writes: “I wish this initiative great success. I encourage you to respect the rules and, of course, the measures of security, so that all competition is done under safe circumstances. And of course, stay honest, masters’ athletics is first of all fair play. If we all respect that, the challenge will become a great success.”

But since money is involved, I wondered whether the USATF Masters T&F Committee was still subsidizing John’s site. So as I’ve done for many years, I wrote the new masters treasurer — Mike Travers, replacing longtime treasurer Carroll DeWeese — for a copy of the national masters track budget. Then things got weird.

USATF Masters T&F leaders refused to share the annual budget, which also would show if National Masters News was getting its annual $5,000 subsidy. People wrote me “off the record” explanations why the budget was now unavailable. And USATF Indy PR lady Susan Hazzard wrote me: “Respectfully, Ken. We don’t share our budgets with the media.”

That was news to Carroll, who wrote me:

I was not aware of any particular policy by USATF on sharing Committee Budgets. My policy was to be as open and transparent as possible regarding the MTF budget and expenditures. The only items not shared was the actual costs for drug testing. It was among the largest single expenditures in the MTF Budget, but the policy was not to reveal the actual amount so that people could not infer exactly how much testing was being made. Many test were being conducted at the MTF National Indoors and Outdoors each year with typically at least one other Championship being tested.

By being open, everyone in MTF could see what they and others had spent on what. By “everyone,” I mean any person with MTF Budget responsibility, any member, and anyone else that asked, including media.

National Masters News provides outreach for MTF. The funding is not a gift but is for services rendered. John’s database is indispensable for MTF. It allows Masters from around the world to get information and comparisons that they could not get otherwise. Again, MTF is not gifting John. He is providing various services directly and indirectly to MTF.

Regarding the MTF budget for 2020, it has become somewhat moot with the pandemic. The MTF Indoor, Outdoor, and other Championships have been canceled. The WMA in Toronto was canceled. Virtually every major expected MTF expense for 2020 has not occurred.

The real issue is not the 2020 budget, but how much support USATF will provide MTF for 2021. With the WMA moved to Finland from Canada, expenses can be expected to be higher. On the other hand, USATF will be in a financial crisis given that the Olympics is moved to next year and USATF will have a drop in revenue to 2020.

Worried that National Masters News would take a big revenue hit from meet advertising dropping off a cliff, I subscribed to NMN for the first time in many years. (I had been getting free copies until a couple years ago — partly because I gave NMN free advertising but also because I gave them photos at cut-rate prices. NMN cut off my comp copies around the time I wrote about the doping case of Greg Pizza, who was editor/publisher Amanda Scotti’s boyfriend at the time.)

Having seen local papers close across the country or become ghosts newspapers, I’m acutely aware of the plight of print media. So I decided to subscribe for a year online, ordering the print edition.

I also took note of Amanda’s note in the June/July issue, which I saw as a PDF, sent by a friend.

Before the Pandemic closed down the country, we wereon our usual trajectory, Indoor meets were underway, results were starting to roll in. Then everything shutdown. No more meet reports, no upcoming meet advertising, few All American orders to fill. All the usual NMN support, both content-wise and financially, was suddenly gone, just gone….

NMN will persevere too. In the coming months we may have to skip an issue or two or perhaps produce a temporary online-only edition until there is news in our sport to provide content, I’m just not sure. I have no intention of stopping production and any
measures dictated by circumstances will be short-term. I do hope that our readers will understand and bear with us while we do our best to get back to normal.

But again things got weird when I wrote Amanda about my subscription and intention to recommend that everyone with an interest in masters track subscribe to NMN.

Hello Ken, thank you for your offer, and for your subscription purchase, but I would rather NMN not be a blog topic and I do not give permission for posting the magazine or any of its content on your site.

Dissolving NMN has never been contemplated in any form and to raise that specter in a blog as you intimate would be very misleading. The current lack of competition due to pandemic concerns, does mean that the focus of upcoming issues of NMN may differ slightly from what we’ve published in the past, but once competitions resume we will return to our normal format.

Thank you again for considering NMN’s wellbeing, I hope you and your family are healthy, safe and stay that way.

So now that’s resolved — NMN isn’t in deep doo-doo — I feel safe in writing my recommendation.

The magazine has solid columnists, first-rate photography and a world-class designer in Tami Kacevas. It’s certainly a far cry from the the NMN of yore, when Al Sheahen wrote fire breathing dispatched on national and world masters issues. But nobody can be Al Sheahen.

Upmost in my mind, however, is that masters print media continue to chronicle our niche. And NMN is part of our history and DNA. At the risk of crying wolf, I urge y’all to help keep NMN afloat until The Beast departs.

Our sport can afford a lost season or three — and I stand by my prediction that it’ll be 2024 before world meets resume — but I think a couple years of steep revenue losses could doom NMN. We can’t allow NMN to go away.