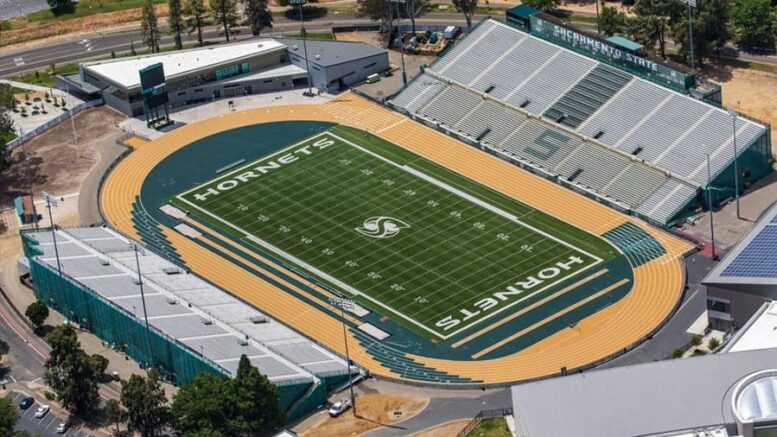 Sacramento State has a fast track but a dearth of shade for summertime scorching temps.

Yesterday’s newsy email from USATF Masters has raised concerns that our 2021 national outdoor meet won’t be held in Sacramento as previously awarded.

All we know is: “Summer 2021 – USATF Masters Outdoor Championships: To be announced soon.” I’ve written to USATF Masters Prez Jerry Bookin-Weiner and others but haven’t heard back. I also wrote to the LOC (the Sacto Sports Commission) as well as the hosting USATF Pacific Association.

The meet is currently “on” for Sacramento, CA;

The dates are currently under discussion between the MTF Executive Committee and the Sacramento Local Organizing Committee, led by the USATF Pacific Association;

No firm decisions on dates have been made – there are many moving parts to putting on a masters outdoor championships and many factors need to be taken into account;

If you read something purporting to say the meet is cancelled or will be held somewhere else or will be held on any specific set of dates, DO NOT BELIEVE IT UNLESS IT COMES FROM THE MTF EXECUTIVE COMMITTEE.

So that’s all I know. California’s capital was the site of 2010 nationals and 2011 worlds — and today was moved into a less restrictive “red tier” for public gatherings.

I’ll keep y’all in the loop as intel arrives.

Here’s the email note, for posterity:

With new COVID-19 cases dropping and the vaccine rollout gaining steam for our athletes over age 65, USATF Masters is preparing to return to competition during the course of 2021. In doing so, our official USATF Masters meets will comply with all USATF’s COVID-19 Protocols in effect at the time of the meet.

Points for the 2020-2021 Grand Prix can be earned in each of the first four events. The Grand Prix individual and team awards will then be awarded at a special award event in Tallahassee on December 11.

The Masters Exhibition Long Jump will be the inaugural Rex Harvey Memorial Masters Exhibition Event at the Drake Relays. Up to four men and four women in the 40-59 age groups will be selected to compete in the event to be held during the 2021 Drake Relays in Des Moines, Iowa in April (likely date for the event is Friday, April 23, with the possibility that it may be shifted to Saturday, April 24).

Masters long jumpers interested in competing in this event should complete this formor contact MTF Exhibition Events Subcommittee Chair Linda Carty at lcarty@fiu.edu by Friday March 19, 2021. Those selected to participate will have their accommodations and local transportation in Des Moines covered by funds generated by the Rex Harvey Memorial Endowment at the Drake Relays.

In December 2020, World Masters Athletics announced the following schedule for upcoming WMA Championships; no dates have been announced for any of these events at this time:

After interviewing nearly 50 applicants for positions as MTF Subcommittee Chairs, Liaisons, USATF Committee Representatives, Task Force Managers, and other positions, the MTF Officers presented a slate to the Executive Committee for approval. The following list of nominees were all approved and have assumed their duties:

USATF Board Representative (term expires in 2022)

We appreciate all those who are supporting our Masters LDR Ambassador calls. There were a record 140 participants from 70 clubs on our February 11 call and another 39 who registered and received the presentation online. They were able to hear directly from two of this year’s race directors, Terry Mullane and Rick Streeter, as well as Amanda Scotti from National Masters News. This is a great opportunity to stay up to date with the very latest information on 2021 and 2022. CLICK HERE to register for the next call.

Points for the 2020-2021 Grand Prix can be earned in each of the first four events. CLICK HERE for the scoring and rules of this year’s Grand Prix. The Grand Prix individual and team awards will then be awarded at a special award event in Tallahassee on December 11.

For 2022, we are focused on 9-10 geographically diverse Grand Prix events. We have already identified 7 of those events and are in discussions for the remaining 2-3. Importantly, we are committed to publishing the entire 2022 schedule by October 2021. The 2022 Masters Grand Prix schedule will kick off with the 2021 USATF Club Cross Country Championships in Tallahassee.

They have set some ambitious goals to dramatically improve the quality of our communications, including leveraging existing communication channels, building better websites, establishing a presence on social media, and improved outreach to running clubs and USATF Associations.

46 Comments on "Sacramento 2021 masters nationals spiked? Email newsletter provokes questions on when, where"