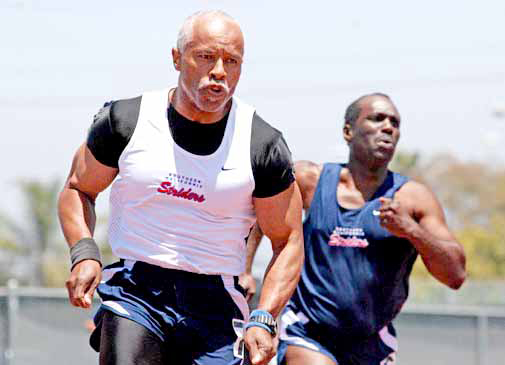 Results are posted for the Southern California Striders Meet of Champions at Santa Ana College. The top mark was by Damien Leake, who at 65 clocked a legal 12.40 in the 100 — with the listed world record being 12.33 by Bill Collins at the 2017 Penn Relays.

On Saturday, Damien responded to some queries.

“I am hoping to take a real shot at Bill’s WR,” he said. “I was a little surprised at how close I was this early in the season, as I am a little ‘soft’ because I’ve been doing a lot more coaching than training this year.”

He says he expects to be in better shape at the Sierra Gold meet and Spokane nationals — if his professional actings gigs allow.

“As always, my schedule changes according to what work comes my way,” he said.

I’m not aware of any American records at the May 6 Striders meet, but our friend Annelies Steekelenburg of Malibu was excited to set a Dutch W70 record in the high jump with her 1.22 meters (4 feet even.)

I also had a chance to praise his form to a camera crew filming Phil for a documentary. Greg Pizza (who ate my lunch) also was competing in M60 (running 13.46 and 27.94) as he continued his comeback from a 20-month doping suspension.

My old friend Richard Watson, the Yuma anesthesiologist, did his usual five throws (winning the hammer at 65) and revealed he retired six months ago. Gorgeous sunny day in the mid-70s. For once I didn’t take pictures. But images are vivid in my head.