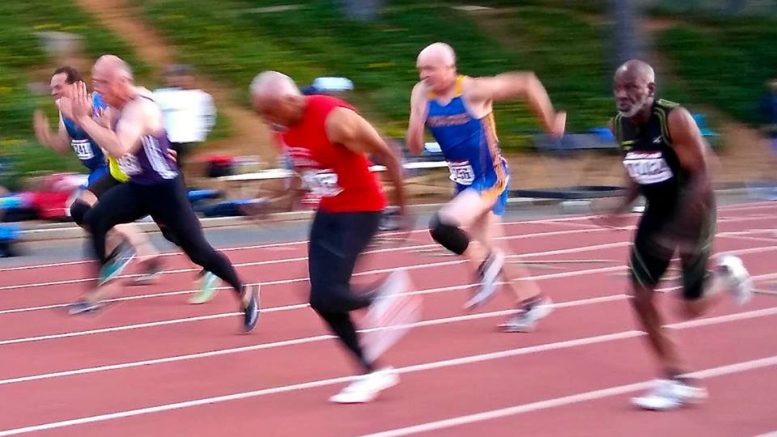 Damien Leake (in red) and Charles Allie (at right) were truly blurs in July's Sierra Gold 100.

Damien Leake didn’t run at Malaga, but the M65 sprint star’s marks at the mid-October Huntsman World Senior Games make for interesting comparisons. It isn’t apples to apples since the Utah meet didn’t have heats and semis. And conditions differ. But check out Damien’s times and distances. ( ts are here.) Linda and Damien each had a $1,000 payday at Nevada Union High School in July.

Another prolific star at Huntsman (who also competed at Malaga) was W65 thrower/sprinter Linda Cohn, who lives in the Northridge section of Los Angeles, a short freeway drive away from Damien in Van Nuys.

Finally, check out the results for M75 Bill Wilson, who won six golds and two silvers in St. George, Utah.

His Northern California hometown paper quoted him: “I just keep adding events,” said Wilson, who competed in his first Huntsman Games 11 years ago. “I started with softball, and my wife saw all the other sports there and asked me what I did in high school. I told her, ‘I did the broad jump and the high jump and ran the relay,’ so she said ‘I’m going to sign you up for next year.’ The next year came and I won the long jump.”

But I’ve also been busy covering stuff like a Bernie Sanders rally and a Monday night temple vigil for the Pittsburgh massacre victims. (See my ambush interview of San Diego County’s district attorney, who went mum when asked about an anti-George Soros website some considered anti-Semitic.) Chris and Ken (center) showed off their hardware (woodenware) at Press Club awards.