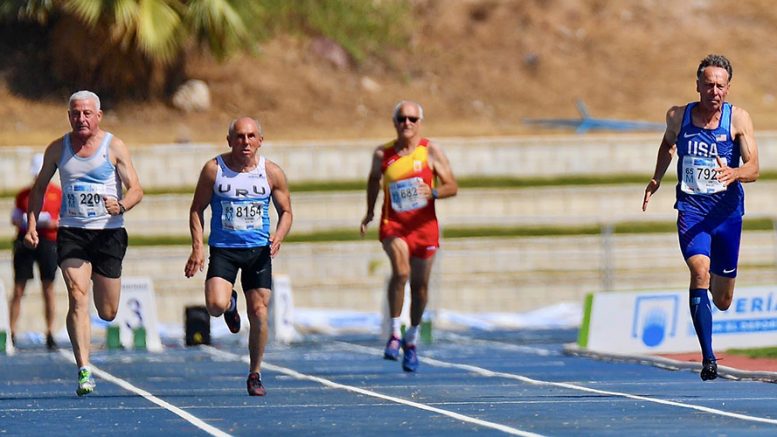 At 67, Michael Kish of Nutley, New Jersey, is a relative newbie to masters track. He took up the sport at 59, taking advice to check out the New Jersey Senior Olympics. So when he deciubded to enter Malaga in the 100 and 200, he naturally wondered about running a relay.

In late July, Michael wrote USA Team Manager Phil Greenwald, who graciously replied, discussing the difficulty of saying whether he would be on a foursome. Phil concluded his 400-word note: “My advice is always to plan your trip around your individual events; if you are available for the relays and we have a slot for you, that is a bonus. Unfortunately, there are so many things outside your control that planning on running a relay is not a good strategy.”

Unfortunately, Phil didn’t share details on how Michael could submit his name in Spain to be part of a relay. So the 1969 Essex Catholic graduate (and teammate of Marty Liquori) saw the week gap between the 200 final and the relays, sighed and made plans to visit Madrid with his wife, Jean, and fly home the Sunday of the relays.

But in a phone chat Thursday, Michael told me that while in Malaga, “no one said anything to me about the relays — none.” He received no email from the Team Selection Committee either. (He said his T-Mobile account worked fine.) He attended a 10:30 a.m. team meeting the first Tuesday — before the 100 final — but heard nothing about how to apply for a relay. He also was staying at a downtown Marriott and didn’t have access to Team USA leaders at the Hilton Garden Inn.

Michael says he had a short chat with someone I took to be USATF Masters Vice Chair Jerry Bookin-Weiner about how to arrange for physical therapy, but got no info about the relays.

“Nobody approached me,” Michael said. “I was out of the loop for the whole thing.”

He would have changed his Madrid plans had he known he was a slam-dunk for the M65 relay — where M70 Charles Allie dropped down for a world-record attempt.

“I wanted to run,” he said. “I was willing to come back [to Malaga] … I could have been running if the relay wanted me to run.” And he would have changed his flight home to Monday as well, he told me.

Hearing nothing from anybody, Michael and Jean “just let it go” and didn’t learn of the relay controversy until getting home to New Jersey, where he’s been retired for three years after a 38-year career in special education. His reaction to the Charlie dropdown and WR attempt?

“Everyone wants to run a world record and get medals,” Michael said. “But I think this kind of situation may have gotten out of hand.”

When he asked in July about relay opportunities, and “nobody gave me a good answer… I decided: Well, I’ll just not run [the relay]. That week gap [between the 200 and relay] kind of threw me.”

Michael stressed several times that he isn’t angry or “vilifying” anyone.

In a follow-up email, Michael wrote me:

In retrospect to all that has transpired related to the M65 relay selections and myself not being part of the relay, as I said I’m not angry just disappointed. It’s disappointing because there seems to have been not just a lack of information/communication as you indicated, but the best 100/200m 65s didn’t get to run as a group.

It would have been gratifying to know that the 65s were chosen based on our performances at Malaga, as well as during our performance times during the summer. I’m unsure about the 65s breaking any world or American record if I was on it, but I’m fairly confident that we would still have come in first, barring any injury. And yes, I would have liked to have made an attempt at any record with just the 65s. Who wouldn’t?

As to not being contacted by anyone to run the relay and all that transpired in selecting the 65 team after reading your articles, participants responses to Roger’s issues on how the relay teams were selected, and my relay issues, I have reflected on these issues this way: I’m more then pleased with my performances placing second and third in the 100/200m in Malaga and proud having represented my country and bringing home two medals. Regardless, it was a fun experience despite the relay issues.

On the phone, Michael said he’s leaning toward running the WMA regional Toronto meet in 2019 (as he did last year). And 2020 worlds, of course. (He’s ranked third in the world this year in the M65 100 after WR man Damien Leake and Steve Peters.)

He’ll be ready for entering the relay pool. Americans in the M65 200 final were (from left) David Craig, Michael Kish and George Haywood.